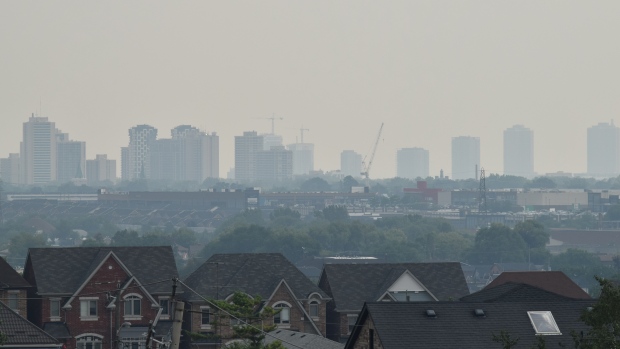 A hazy sky is seen in Toronto on Sunday, July 25, 2021. Environment Canada has issued a special air quality statement for the city due to forest fire smoke. (CP24/Bryann Aguilar)

The statement was issued due to high levels of wildfire smoke in the province, which can cause increased air pollution and reduced visibility.

“Smoke plumes from active forest fires in northwestern Ontario might affect portions of southern Ontario this afternoon. Particulate matter combining with ground level ozone may deteriorate the air quality,” a release on the statement issued reads. 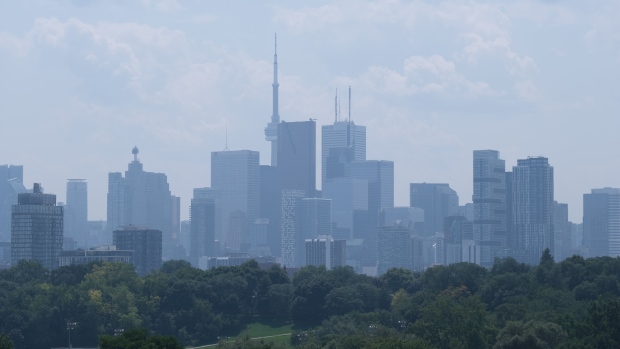 The agency warns residents who are exposed to wildfire smoke to take extra precautions, adding that wildfire smoke is a “constantly-changing mixture of particles and gases which includes many chemicals that can be harmful to your health,” especially to children, seniors and those with cardiovascular or lung disease.

Look out for symptoms such as increased coughing, throat irritation, headaches or shortness of breath.

Conditions may persist into Monday, according to Environment Canada.

This week, hundreds of evacuees from northwestern Ontario First Nations were forced to call a Mississauga hotel their temporary home after wildfires threatened their communities.

According to Ontario's Ministry of Natural Resources and Forestry, as of July 24, there were over 150 active fires burning in the province.

The full list of regions with special air quality statements issued can be viewed here.