Special weather statement issued for Toronto ahead of significant snowfall

A significant winter storm is headed to Ontario that could dump up to 40 centimetres of snow in some regions and cause treacherous driving conditions.

According to Environment Canada, snow is forecast to arrive across southern Ontario on Sunday night and will "spread rapidly northeastward through the day Monday."

The weather agency says snow will fall heavily at times, with rates of a few centimetres per hour possible. Winds are also expected to gust up to 50 km/h Monday afternoon, causing poor visibility due to blowing snow.

"Travel will likely be difficult due to the expected heavy snow," Environment Canada said.

Regions like Niagara Falls, St. Catharines, Welland, Grimsby, Kingston, Ottawa, Peterborough, Brockville, Tweed, and Cornwall should be prepared for anywhere between 25 and 40 centimetres of snow. 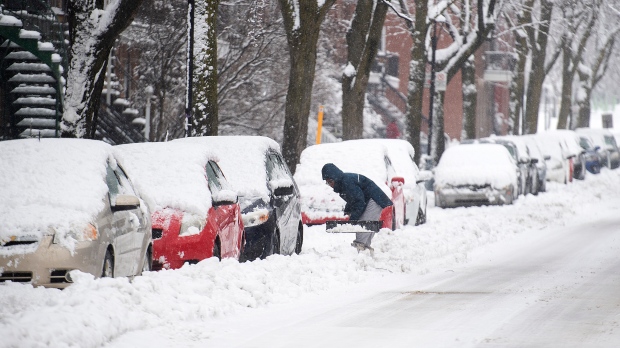 Residents in these regions are being urged to avoid travel if possible.

"There may be a significant impact on rush hour traffic in urban areas," Environment Canada said.

In Toronto, snowfall accumulations of 10 to 20 centimetres of snow are forecast Sunday night into Monday, however Environment Canada said "higher amounts can't be ruled out."

Extreme cold today #Toronto (feels like -30 with the wind chill right now) & a high of just -13C. Then brace yourself for a significant storm arriving late Sunday - early Monday. Track is still a bit uncertain but we could see significant snowfall/blowing snow, impacting travel pic.twitter.com/fiIkdSyEBh

Monday is the first day Ontario students are slated to return to in-person learning across Ontario.

Conditions are forecast to improve by Monday evening as the snow comes to an end.