Speed was a factor in deadly collision in Guelph: police 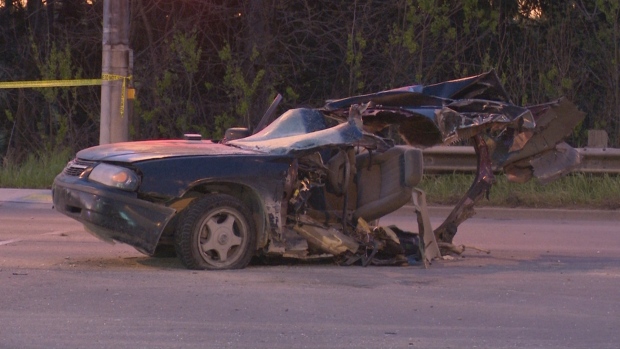 A vehicle involved in a deadly collision in Guelph on Saturday morning is shown. (David Ritchie)

Police say that speed was a factor in a violent crash in Guelph that killed a man and left a woman fighting for her life in hospital.

Reports from the scene suggest that a single vehicle was travelling eastbound on Wellington Street near Imperial Road at around 12:45 a.m. when it left the roadway and slammed into a hydro pole.

The force of the impact was such that the vehicle was split in half.

Police say that a male occupant of the vehicle was pronounced dead on scene while a female occupant was taken to hospital in life-threatening condition.

The investigation into the collision is ongoing, according to police.