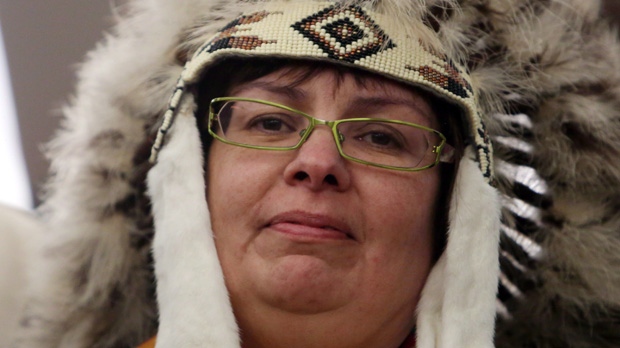 Indeed, for a crisis that just two weeks ago had the prime minister squarely at its centre, it seemed a weary and chaotic finale, one largely devoid of anti-Harper vitriol.

The Cree leader, who hadn't had solid food since Dec. 11, spent most of the day recovering in hospital, only to show up unannounced at a celebration that brought First Nations chiefs from across the country.

A chanting, drumming crowd greeted her at a downtown Ottawa hotel, where she thanked family, friends and supporters for their backing during the six chilly weeks she spent on Victoria Island, just upstream from Parliament Hill.

She suggested she now intends to step back from the political struggle.

"There you go, chiefs, you take over and I'll be part of the audience some times, so I'll be watching you guys," Spence said, calling for unity among First Nations leaders.

"It's time to really stay together no matter what hardship that we go through, and no matter what the government intends to do to us to divide us. Always remember that we're here together and we're here for our people, especially the youth."

Emissaries from federal opposition parties kept a low profile at the second ceremony, where Spence herself signed the declaration that had been so painstakingly crafted to bring her protest to a conclusion.

NDP critics Charlie Angus and Romeo Saganash had been on hand at the hotel, but scheduling challenges kept them from lingering long enough to witness Spence's triumphant appearance.

The scene was a far cry from Jan. 11, when the street in front of Harper's working office near Parliament Hill was filled with protesters beating drums, pounding on his door and threatening widespread disruption if he didn't repeal changes to environmental legislation and improve conditions on reserves.

Inside the building on that day, Assembly of First Nations chiefs meeting with Harper got the chance to air their grievances about his government, demanding he empower senior officials to modernize ancient treaties and implement aboriginal rights.

The common tone among chiefs and Idle No More protesters alike was a loud, angry impatience with the federal government in general and Harper in particular.

On Thursday, however, the anti-Harper venom that united a disparate movement just a fortnight earlier was largely absent.

Spence's spokesman Danny Metatawabin, for instance, stressed the need to continue the struggle.

Elder Raymond Robinson, who staged a hunger protest alongside Spence, lashed out at the media and a long Canadian history of disrespect towards First Nations people.

And the NDP's Saganash and interim Liberal leader Bob Rae -- both instrumental in reaching a workable resolution to the protest -- spoke about the need for political will to make things change.

But the lack of a direct attack on the Conservatives does not mean Harper has skated through this First Nations crisis without a bruise, Rae cautioned. Indeed, he said, neither he nor his party grasp what is at stake.

"I think Mr. Harper has a very limited view of this issue, and I don't think he is showing the necessary imagination and leadership to deal with it in the way it has to be dealt with," Rae said.

"Frankly, polls may come up and down and people may say this and that about this issue. To me, it's not about polls, it's about justice.... They just don't get it, frankly."

Two new analyses appear to indicate the Canadian public remains confused by -- and is steadily disengaging from -- efforts by aboriginal activists and leaders to improve their relationship with the rest of Canada.

A telephone survey conducted by Harris-Decima for The Canadian Press suggests fewer than four in ten Canadians are both familiar with and sympathetic to the goals and aims of the Idle No More cause.

And an analysis of the movement's influence on social media platforms implies a waning influence: while some 17,000 people tweeted about Idle No More at the height of the protest Jan. 11, that number had dwindled to about 5,600 eight days later, says a new study by digital public affairs strategist Mark Blevis.

Nonetheless, there are signs it had some impact.

While Harper has avoided talking with or about Spence, he has engaged in the national conversation about how to improve the quality of life on reserves. In the Jan. 11 meetings with AFN chiefs, Harper agreed to appoint top people to lead discussions on modernizing treaties, speeding up land claims negotiations and improving education.

Plus, he agreed to move the date of that meeting -- a gesture Spence's supporters have interpreted as a tacit acknowledgment of her protest.

"The prime minister, for the first time, he did bend," said Michele Audette, who heads the Native Womens Association of Canada.

"Why? Because (of) Idle No More, because of the two men who decided to be with Chief Spence" in her hunger protest.

Still, many a chief was sombre Thursday about the outcome of the protests, quietly expressing a wish that she had declared victory on Jan. 11, while the outcry was so loud and the prime minister was paying attention.

They vowed to make sure the declaration that brought an end to Spence's protest and united the AFN, the federal Liberals and the NDP will not collect dust on a shelf somewhere.

"The fight does not end because the hunger strike ends. The fight continues. We have mobilized a nation."