Staff recommend that city move ahead with tax on vacant homes 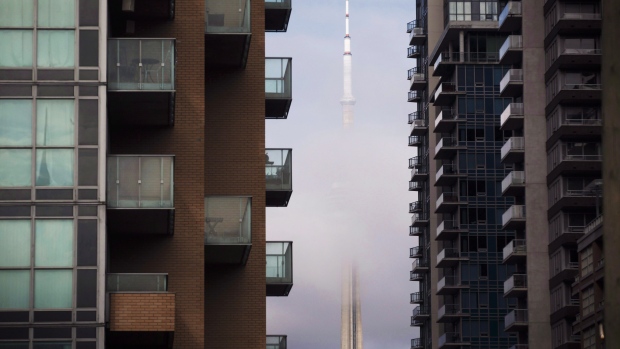 Staff are recommending that the city move ahead with implementing a tax on vacant homes, a move that Mayor John Tory says could help to return thousands of units to the marketplace.

A staff report that will be considered by Tory’s executive committee next week recommends that the city establish a dedicated team to lead the implementation of the tax with the goal of beginning to collect it in 2022.

Staff say that while it is impossible to know the precise number of vacant homes in Toronto, the tax could bring in approximately $55 to $66 million in revenue per year if set at one per cent of a home’s assessed value.

Tory, however, told reporters at a press conference on Thursday morning that the “real purpose of the tax” is to discourage owners from letting homes sit empty and not just to pad the city’s coffers.

“We simply cannot afford from a housing perspective to have accommodations for thousands of people sitting empty. It is just not something we can afford to do in the City of Toronto,” he said. “I think this is a measure worth proceeding with because what it will do is make sure that people who have homes that are presently sitting vacant as an investment or for some other reason will have to think carefully about whether they leave those homes vacant.”

The staff report says that approximately 9,000 to 27,000 households in Toronto have “extremely low to very low consumption volumes” for water and hydro-electric utility usage, which could point to those properties sitting vacant for long periods of time.

But it says that the statistic is not conclusive since many condominium buildings are bulk-metred and would not be included in the data.

Staff recommend that in implementing a vacant home tax the city opt for a “universal declaration” approach, wherein every homeowner would be required to fill out a form annually indicating whether their property is “occupied, vacant or vacant with exemption” for the majority of the year.

The staff report does not explicitly say which exemptions the city should allow for but does list a number that are in place in Vancouver, where a similar tax was introduced in 2017.

Those include allowances for homes undergoing major renovations and homes where a resident has been committed to a long-term care home or is recently deceased.

“We know from Vancouver’s experience that the sky didn’t fall when this tax was brought in in any way, shape or form,” Tory told reporters. “So I support moving ahead with this as a housing measure and doing everything we can to make sure it is implemented in the right way.”

Idea was first proposed in 2017

Tory first pushed the provincial government for the authority to levy a tax on vacant homes in 2017 but the idea was ultimately put on hold to allow for further study.

The staff report points out that between 2006 and 2016 the median household income in Toronto grew by 25 per cent while the median monthly payments for rented dwellings increased by more than four times that – 109 per cent.

It says that while the number of housing units available for rent has “increased throughout the pandemic,” there remains a need for more permanent measures to address the housing shortage in Toronto.

To that end, they say that the tax could serve as a “signal that housing stock and supply is as important for people as homes and not primarily as a buy-hold speculative commodity without any public regulation.”

The tax is, however, is facing criticism from some in the real estate industry.

In a statement provided to CP24, the Toronto Real Estate Board said that it believes all housing policy decisions need to be “evidence-based” and at this time it is not clear what a tax on vacant tax would accomplish.

“Given the current state of the Toronto rental market, the purpose of such a tax is not immediately clear at this time,” CEO John DiMichele said in the statement. “Nevertheless, TRREB looks forward to providing input on this issue as city council deliberates on whether or not to move forward with the proposed tax.”

The staff report says that the city will have to spend $10 to $13 million in start-up costs over the next two years if it wants to implement the tax.