Standards for coronavirus protection to be reviewed, health agency says 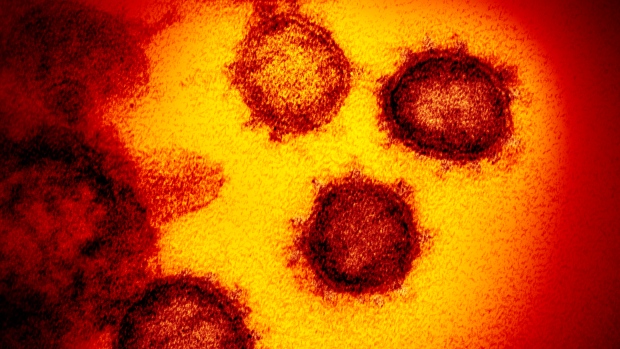 This undated electron microscope image made available by the U.S. National Institutes of Health in February 2020 shows the Novel Coronavirus SARS-CoV-2. Also known as 2019-nCoV, the virus causes COVID-19. The sample was isolated from a patient in the U.S. (NIAID-RML via AP)

BREAKING: Global Affairs Canada says they are now aware of 32 Canadians aboard the Diamond Princess cruise ship who have tested positive for the COVID-19 virus.

(This is a breaking news update. Earlier story follows)

The agency says feedback from the nurses' unions and other associations will be considered by a national advisory committee on infection prevention and control as it looks to update the guidance.

The protocols set out how health workers should protect themselves and their patients if they encounter a potential case of the new coronavirus, or COVID-19, including the kind of protective equipment they should use.

The Canadian Federation of Nurses' Unions wrote to Health Minister Patty Hajdu last week to tell her the guidelines are unacceptable since they assume the virus cannot spread easily through the air, only through larger droplets from coughing or sneezing.

In a statement Monday, the federal public-health agency says the guidelines were approved by a special advisory committee of federal and provincial representatives.

“Protecting health care workers and patients from exposure to the novel coronavirus is our priority,” an agency spokesperson wrote Monday. “We will continue to engage with stakeholders and apply evidence and expert advice in updating guidance.”

Though Canada's current federal guidelines are in line with World Health Organization recommendations, both the Centers for Disease Control and Prevention in the United States and its European counterpart call for added precautions to protect against the possibility the disease is airborne.

Provinces can also set their own standards and protocols to protect workers from possible exposure to the virus. Ontario has already called for its workers to wear respirators when dealing with potential cases of COVID-19, rather than surgical masks as the federal agency suggests.

So far, only eight cases of the coronavirus have been confirmed in Canada, but public health authorities agree they must be prepared for that to change.

The health agency says it's trying to chase down some people who left a cruise ship in Cambodia, the MS Westerdam, before one of their fellow passengers tested positive for the illness.

“Canadian passengers from the MS Westerdam were identified so that they would be screened upon arrival at a port of entry into Canada,” it said in a written statement Monday.

They'll be given information about COVID-19 and asked to isolate themselves for two weeks, the agency said, and to fill out a form so their local public-health authorities can contact them.

But those screens went up too late for some of the hundreds of Canadians who were aboard the Holland America ship.

“Some travellers returned before these measures were put in place. The Public Health Agency of Canada and the Canada Border Services Agency are working together to identify those individuals who will be contacted by PHAC officials,” the agency's statement said.

Canada is also preparing for another wave of evacuees with possible exposure to the virus, though health authorities say their risk of infection is low.

Hundreds of Canadians who have spent almost two weeks in isolation on a second cruise ship, the Diamond Princess docked in Yokohama, Japan, will be flown home to Canada to spend another two weeks of quarantine in Cornwall, Ont.

The Diamond Princess has had more than 450 cases confirmed on board so far.

During their repatriation the Diamond Princess passengers will follow the same rules as the Canadians and their families who recently returned from Wuhan, China, the centre of the outbreak.

Some in Cornwall, including the town's mayor Bernadette Clement, have expressed reservations about hosting a large population of people who may have been exposed to the virus. They will be housed in an isolated section of the Nav Centre, a training centre with attached hotel and conference facility.

Health officials have assured people in the area the risk of those repatriated Canadians having the illness when they arrive in Canada is low, and they are taking precautions.

“We are satisfied that the infection control precautions and quarantine procedures will meet the needs of the quarantined individuals while also keeping the public safe,” the Eastern Ontario Health Unit's medical officer of health, Dr. Paul Roumeliotis, said in a statement Monday.

This report by The Canadian Press was first published Feb. 17, 2020.

This undated electron microscope image made available by the U.S. National Institutes of Health in February 2020 shows the Novel Coronavirus SARS-CoV-2, orange, emerging from the surface of cells, green, cultured in the lab. Also known as 2019-nCoV, the virus causes COVID-19. The sample was isolated from a patient in the U.S. (NIAID-RML via AP)