This is the stern message from a Toronto couple who, along with their baby, tested positive for COVID-19 earlier this month. All three have since recovered.

Jesse Glowinsky, and his three-month-old son Xander, tested positive for the virus on March 10. Heather, Jesse's wife, contracted the virus two days later. The couple said they caught it from Jesse's dad, who had travelled to Washington, D.C. for a conference.

"We had a family dinner just like we do every other Friday and we stayed far away because he had a sore throat, but somehow we ended up with it," Heather said.

Since testing positive, Ontario would add more than 800 cases, and the premier would declare a provincial state of emergency, banning large gathering and closing non-essential services. In Canada, the cases have ballooned to more than 3,000. In total, more than 500,000 people have been infected by the virus worldwide.

Health officials consider a case as resolved after a person receives two negative test results that are at least 24 hours apart.

Ontario will soon begin using a new definition of recovery that does not involve confirmation through testing.

It is believed the new definition, where a patient is considered recovered 14 days after the onset of symptoms so long as they no longer feel ill and were never hospitalized, will rapidly increase the number of cases counted as recoveries in Ontario.

Following eighteen days of self-quarantine, the family of three and Jesse's dad are recuperating from the illness and wants others to know that the virus should be taken seriously. 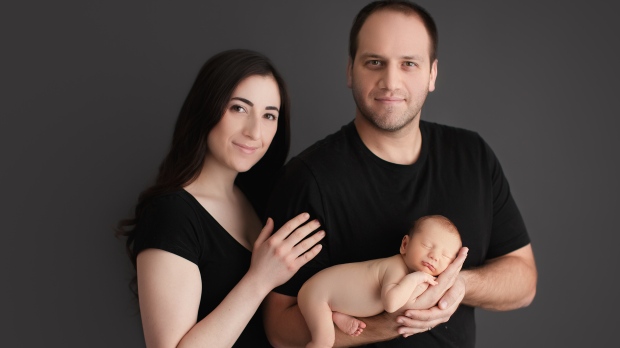 "It's no joke," Heather said. "We were fine, and we're thankful for that, but something that was mild for us could kill someone."

Jesse said his symptoms started with a headache and sore throat. Then, he said he had a cough, difficulty breathing, and developed a fever.

Heather, on the other hand, said she had a low-grade fever, which turned into what she felt like was a sinus infection. She said she had bad sinus headaches.

"But for both of us, it was really just a few days of feeling unwell. And then thankfully, we got over it," Heather said.

As for baby Xander, Heather said he had a mild fever, which prompted them to go to a hospital. She said he seemed congested and was breathing "a little faster than normal."

Seeing their son go through COVID-19 testing was something the couple said they would never forget.

"Having a swab shoved up your baby's nostril is an experience you'll never forget, that's for sure," Jesse said.

Heather said they were scared because they didn't know what to do.

After going through the illness, the couple said it is crucial for people to adhere to social distancing guidelines.

"It is really, really important that people take everything that they're hearing on the news seriously," Heather said.

"We've seen too many people that haven't, and we need everyone to stay home right now."

- with files from Leena Latafat