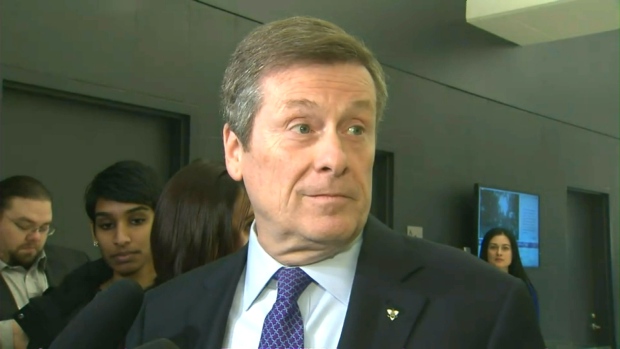 Mayor John Tory is shown in this file photo.

The Forum Research Poll released Friday shows nearly seven in 10 Torontonians (72 per cent) support the current mayor. That rate has been virtually unchanged since Tory took office on December.

At the same time, the poll shows the political credibility of Tory’s predecessor and self-styled opposition critic – current councillor Rob Ford—is slipping. Fewer than four in 10 people (39 per cent) support the job that Councillor Ford is doing, the poll found, though his support remains stronger in his home region of Etobicoke (47 per cent) and among poorer voters (54 per cent).

The new numbers emerge as the Etobicoke councilor takes a leave of absence to have surgery to remove a rare type of cancerous tumor.

“John Tory is the real deal; he’s maintaining high levels of approval while still managing to take some tough and, frankly, some unpopular decisions,” Forum Research president Lorne Bozinoff said in a news release. “Rob Ford on the other hand, has seen his brand equity diminish, probably because his visibility has diminished.”

Since taking office, Tory has overseen a fare increase on the TTC, breaking a campaign promise not do so. He’s also faced criticism for his support of police carding, a policy that has come under fire by rights groups as being discriminatory. The poll found Tory’s support is strongest among older, wealthier voters.

The poll also asked respondents about the city’s new police chief, Mark Saunders. It found that with less than a month on the job, Chief Saunders sits at 44 per cent support, despite the fact that 41 per cent of respondents say they know nothing about him. The poll found Saunders is popular with younger, less wealthy residents, as well as those who support carding.

The poll surveyed 822 random Toronto voters between May 1 and May 5. Its results are considered accurate to within plus or minus three percentage points, 19 times out of 20.