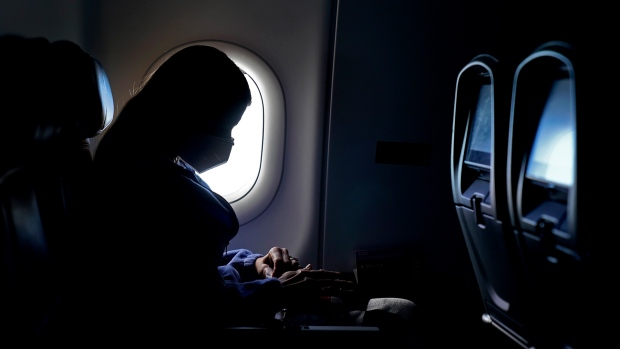 In this Wednesday, Feb. 3, 2021, file photo, a passenger wears a face mask she travels on a Delta Air Lines flight after taking off from Hartsfield-Jackson International Airport in Atlanta. Airlines are dropping some of the temporary service changes they made during the early part of the coronavirus pandemic. Delta is the only airline still blocking middle seats, but there's no guarantee that'll continue past April 30. (AP Photo/Charlie Riedel, File)

“The flight crews and other workers you encounter, they're doing their job,” he said. “They're following regulations and they're there to keep you safe. It is absolutely unacceptable to ever mistreat a transportation worker.

“And of course, there's very serious fines and enforcement around that,” Buttigieg added.

Buttigieg said the federal mask mandate, which remains in effect on planes, buses and trains until Sept. 13, continues to be driven by public health considerations. He stressed that travelers should abide by it as both a matter of safety and respect to transportation workers.

Centers for Disease Control and Prevention guidelines say that fully vaccinated people can go without face coverings inside and outside various public areas.

“These rules and regulations and these bodies of guidance always evolve with the science,” Buttigieg said.

His admonition comes after the Federal Aviation Administration announced last week it was proposing civil penalties as high as $15,000 against five passengers for violations that included allegedly assaulting and yelling at flight attendants.

Southwest Airlines last week also banned a woman accused of punching a flight attendant shortly after a plane from Sacramento, California, landed in San Diego on May 23. The airline said the passenger ignored instructions from the flight attendant before assaulting her. San Diego Harbor Police arrested Vyvianna Quinonez, 28, and charged her with felony battery.

Over the weekend, both Southwest and American Airlines said they would hold off on resuming alcoholic beverage services because of recent incidents of passenger disruption.

Buttigieg spoke on ABC's “This Week” and CNN's “State of the Union.”