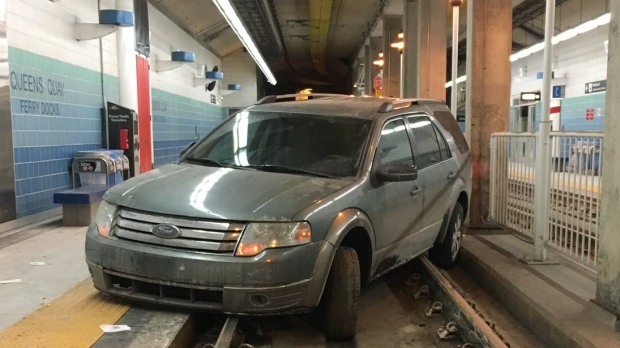 A vehicle is stuck inside the Queen's Quay tunnel near Spadina Avenue. (PHOTO: Twitter/@TPSTauro)

A stalled vehicle inside the Queen’s Quay tunnel toward Union Station disrupted streetcar service in the area for several hours on Sunday.

The 510 Spadina route was forced to turn back northbound at Spadina Avenue and Queen’s Quay and the 509 Harbourfront route turned back westbound in the area.

It took several hours for the scene to clear.

To the driver that thought it was okay to keep going: it wasn’t. Also, taking the plates and cleaning the car just means we trace the #VIN. As per the TTC, it will be a number of hours before they are able to safely remove this vehicle from the tunnel. @TPSOperations @CityNews pic.twitter.com/yrJ6q0RWuh

Speaking to CP24 on Sunday, TTC spokesperson Brad Ross said this is an ongoing problem for the transit agency.

"We have done a number of things at that portal down at Bay and Queen’s Quay. We’ve got rumble strips, we’ve got lights, we’ve got signage. We’ve narrowed it. You really have to not be paying attention to continue to drive through all of that and all the way down on to the track and continue to drive along the track," Ross said.

"We will have to have another look at this and continue to do what we can to really drive the message home that you can’t drive on this right-of-way, especially down into the tunnel."