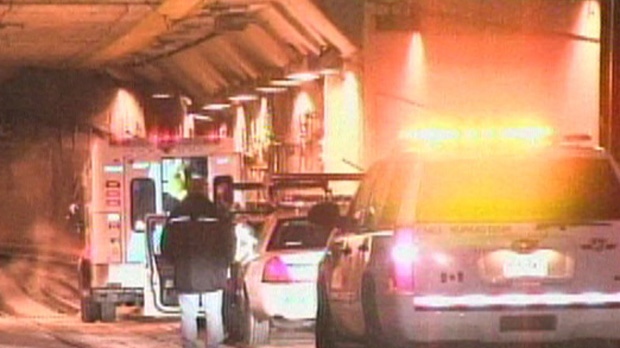 Emergency vehicles are shown at the entrance of a streetcar tunnel near Queens Quay and Bay Street, where a vehicle became trapped Saturday morning.

A car that ended up stuck on the tracks in an underground streetcar tunnel near Queens Quay and Bay Street after a driver from out of town took a wrong turn early Saturday morning has been towed away.

The car was removed from the scene at around 11:40 a.m., nearly 8 hours after it first ended up on the tracks.

The 510 Spadina streetcar was turning back at Queens Quay as a result, but full service has resumed on the line.

According to TTC Spokesperson Brad Ross, this is the third time a car has improperly entered the tunnel over the last few months and TTC officials are now considering placing additional signage at the entrance in the hopes of preventing yet another repeat incident.

"It is something that has happened in the past, mostly with motorists who are unfamiliar with the area, so we want to make sure that everyone remains safe and that nobody gets their car stuck down there," Ross said. "We are looking at signage and making it stonger and more obvious and if a barrier is something that might work we will consider that too."

Police say no criminal charges have been laid against the driver in connection with the incident, however an investigation is ongoing to determine whether charges could be laid under the Highway Traffic Act.