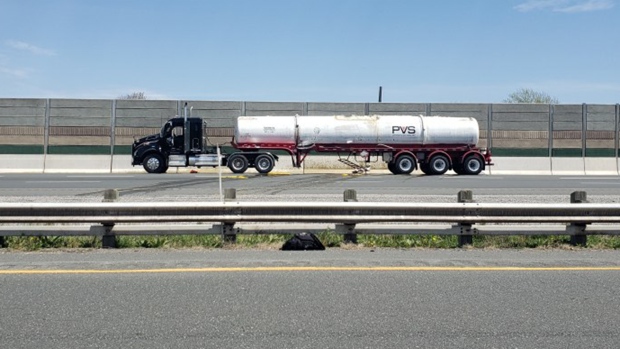 Hydrochloric acid leaks from a damaged transport truck on Highway 406 in St. Catharines in this image shared by Ontario Provincial Police Wednesday, May 11, 2022.(@OPP_HSD /Twitter)

A stretch of Highway 406 in St. Catharines is expected to remain closed into the night after a transport truck spilled hydrochloric acid all over the roadway.

Ontario Provincial Police issued a tweet about the spill at around 12:45 p.m.

OPP Sgt. Kerry Schmidt said in a tweet that a transport truck in the northbound lanes began to deteriorate and started losing its cargo on the highway.

“We have 9,000 kilograms of hydrochloric acid that needs to be offloaded before we can reopen the highway, "Schmidt said.

It is not yet clear how much of the acid spilled. Police said the roadway would need to be repaved before the highway can be reopened.

The strong acid is considered a dangerous good and an irritant. Schmidt said the Ministry of Environment is involved in the cleanup effort.

The Ministry of Transportation said it is investigating any potential damage to the highway.

"MTO’s enforcement and maintenance staff, OPP, fire, and the Ministry of the Environment, Conservation and Parks are all on site, including a hazmat and clean-up crew," a ministry spokesperson told CP24.com in an email.

Schmidt said drivers should avoid the highway for the time being.

“We are working on getting this situation cleaned up as quickly as possible but I know there will be some frustration in the area, so if you could avoid Highway 406 it will be a long delay in those areas,” Schmidt said.

The northbound lanes of the highway remain currently closed between Westchester and Glendale avenues.

Update on road closure - #Hwy406 between Westchester and Glendale closed in both directions due to hydrochloric acid spill. pic.twitter.com/wwX8SppdAx