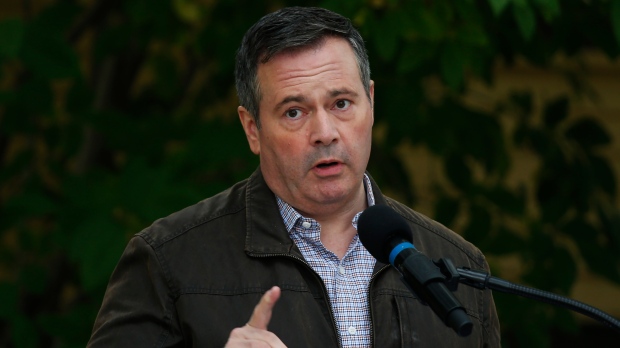 “If stronger action is not taken now, we know that hundreds, potentially thousands, of Albertans will die,” Kenney told a news conference Tuesday.

Alberta, once a national leader in COVID-19 prevention, has been in free fall for over a month, its health system bending dangerously under well over 1,000 new cases a day with more than 100 people in intensive care.

For days, it has the highest rate of new infections of any province.

To combat the crisis, Kenney announced he is restricting restaurants and bars to delivery or takeout and closing casinos and gyms, recreation centres, libraries, theatres and personal service providers such as hair salons.

Retail stores and churches can remain open, but at 15 per cent capacity. Outdoor skating rinks and ski hills may remain active.

The order comes into effect Sunday.

Outdoor social gatherings had been limited to 10 people but are now banned altogether. Fitness activities, such as skating, skiing, or walking, are fine as long as social distance is maintained.

Kenney also imposed a provincewide mask mandate in indoor public spaces, including workplaces, except for farms.

Alberta had been the only province without a sweeping mask rule, although many communities were already mandating face coverings. Kenney had called it unworkable and unnecessary in remote areas and particularly punitive to farmers who already work in socially distanced settings.

Existing school rules stay in place: all students in grades 7 through 12 must learn at home while in-class learning continues for those in lower grades.

The measures are to remain in effect for at least four weeks, putting them in force through the Christmas season.

The new rules are similar to orders imposed by Kenney's government in the spring, except for allowing most retailers to stay open.

In recent weeks, as cases rose precipitously, the Opposition NDP and hundreds of physicians and infectious disease specialists argued for a short, severe lockdown of the economy and public events to avoid swamping the health-care system.

Kenney had argued for a balance of “lives and livelihoods” and said throwing thousands of people out of work would make things worse for the economy, community wellness and mental health.

She later told reporters, after the new measures were announced, that “the premier acted like he didn't have a choice. But let's be clear, he has had many choices, many opportunities to act decisively.

“These restrictions will be tough to bear - more so for vulnerable people in our community and for struggling businesses - but there is provincial, municipal and substantial federal aid available that should allow us all to do the right thing and follow these new public health measures to stop this virus,” said Iveson.

The City of Calgary, in a news release, said it also supports the new rules.

It's the second time in two weeks that Kenney has introduced new restrictions to try to contain the spread of the novel coronavirus.

On Nov. 24, the premier introduced rules to keep businesses open but with tighter health restrictions and limits on gatherings.

Alberta reported more than 21,000 active cases on Tuesday with 654 people in hospital - 112 of them receiving intensive care. Daily death counts have been in the double digits for much of the last week.

Alberta's health system has been reassigning patients, staff, wards and spaces to free up more intensive care beds. The province has also consulted with the federal government and the Red Cross on setting up field hospitals to handle patient overflow.

This report by The Canadian Press was first published Dec. 8, 2020.