Struggling smaller airlines worry federal aid may come too late, if at all 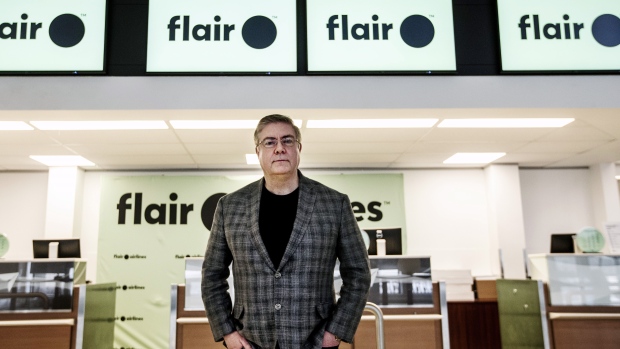 Flair Airlines CEO Jim Scott is pictured at the Edmonton International Airport, in Edmonton on Thursday March 5, 2020. As the federal government gears up to roll out relief measures for hard-hit industries, smaller airlines worry theyâ€™ll be left out of the largesse. THE CANADIAN PRESS/Jason Franson

As the federal government gears up to deliver relief measures for hard-hit industries, smaller airlines worry they'll be left out.

Prime Minister Justin Trudeau announced Monday that federal financing will be available to the country's largest employers to help weather the COVID-19 economic crisis. Loans will start at $60 million for companies with at least $300 million in annual revenues.

Regional carriers, most of which fall far short of that threshold, fear they might go under without a tailor-made support program from Ottawa as border shutdowns and the collapse of global travel continue to choke off demand.

Flair Airlines, an ultra-low-cost carrier based in Edmonton, has reduced its commercial fleet to one airplane since late March. The flight schedule -- 16 trips per week -- stands at 10 per cent of pre-coronavirus levels after the company lost 95 per cent of its revenue in nine days, CEO Jim Scott said.

"We need a federal airline support package that does not select winners and losers but demonstrates a commitment to a diversified and competitive airline industry accessible to all Canadians," Scott said in a statement last week.

He cautioned against a bailout that would reinforce a "David and Goliath system dominated by a large-carrier duopoly."

The $300-million threshold rules out about three-quarters of Canadian airlines from the new relief program, said John McKenna, president of the Air Transportation Association of Canada, which counts 30 smaller carriers as members.

A federal aid package for the territories includes $17 million for northern airlines to help fly food and medical supplies to remote communities. Far-flung areas south of the 60th parallel, such as northwestern Ontario and Nunavik in Quebec, are not covered.

"We want the government of Canada to come out with a plan that treats everyone equitably but fairly," McKenna said.

Part of the anxiety stems from a lack of feedback, with "radio silence" from Ottawa.

"There's not even any dialogue with the government. We have no idea what they're doing," he said. "When we talk to finance, they say, 'Something's coming, we can't talk about it."

McKenna has asked the government for $2 billion in loans and loan guarantees for smaller carriers and maintenance and repair operators.

In a letter sent to the prime minister Friday, his association and a dozen other groups including the National Airlines Council of Canada (NACC) -- which represents Air Canada, WestJet and Transat -- requested relief from various taxes, fees and charges, on top of financial support.

Mike McNaney, head of the NACC, thanked Ottawa on Monday for addressing the "urgent liquidity challenges facing airlines," but said he needed more details around "timelines and process."

Most large airlines said it was too early to comment as they review the fine print, though Sunwing applauded the announcement and said it "shows that government has been listening."

Strings attached to the bridge financing require companies to have already gone unsuccessfully to the banks or the market and demand that recipients open themselves to financial scrutiny and prove their commitment to fighting climate change.

The federal government has also waived the monthly rent paid by airport authorities to Ottawa for the rest of the year, providing support worth up to $331.4 million in ground lease rents from March through December.

At least 20 countries from Norway to New Zealand have announced financial aid specifically for airlines, ranging from equity stakes to loans and grants, sometimes with strings attached that limit dividends and executive bonuses.

Last month the United States rolled out US$25 billion in government aid to pay airline workers and avoid massive layoffs. The assistance includes a mix of cash and loans, with the government getting warrants that can be converted into small ownership stakes in the leading carriers.

The French government has announced at least US$7.66 billion in loans and loan guarantees to rescue Air France, with conditions requiring it to cut carbon emissions in half by 2030 on long and medium-haul routes.

In Germany, the government is in talks with Lufthansa AG for up to US$10.85 billion in aid but demanding a 25 per cent stake in the airline.

Even with planes parked, money continues to bleed as airlines dole out airport fees, leasing payments, and parking and maintenance costs -- each plane needs to have its engine run, tires rotated and hydraulics electronics checked multiple times per week.

"We're a capital intensive industry," Flair's Jim Scott said in a phone interview. "Our fixed costs are very high, and we have no revenues to offset it."