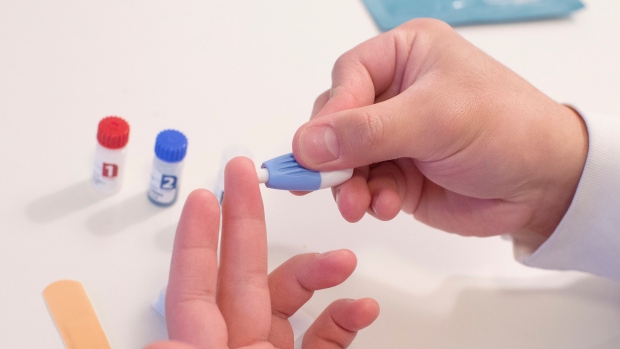 Bryan Quinones demonstrates how to use the Test@Home HIV self-test kit in Toronto, on Friday, April 16, 2021.THE CANADIAN PRESS/Chris Young

Researchers are sending out thousands of free HIV self-test kits as part of a study to help gay men and queer people overcome barriers to getting screened.

The Community-Based Research Centre says longstanding issues such as stigma and lack of access to testing have become even more pronounced during the COVID-19 crisis, which has shuttered many sexual health clinics across the country.

Last November, bioLytical Laboratories' one-minute, finger-prick INSTI HIV Self Test became the first medical device of its kind to be approved for use in Canada.

The technology is seen as a tool to help reduce rates of undetected HIV infections, particularly among marginalized groups.

“Even before the COVID pandemic, we saw that there were barriers to accessing HIV and sexual health testing,” said Nathan Lachowsky, the centre's research director and the survey's principal investigator.

“We're really seeing these HIV self-tests as an opportunity to engage in community and address some of the systemic barriers.”

According to the centre, half of GBT2Q people surveyed last fall said they delayed or skipped testing for sexually transmitted infections during the first six months of the pandemic. More than half of respondents said clinics were closed or unavailable because of COVID-19, while more than a third raised concerns about contracting the novel coronavirus during their visit.

As the pandemic consumes most of Canada's public health resources, Lachowsky said there's a lack of quality data about the spread of HIV and other STIs, and he believes self-tests could help fill in some of those gaps.

“We know from the persistence of HIV pandemic amongst (the GBT2Q) community that we need to innovate, and we need new options,” said Lachowsky, who's also an associate professor at the University of Victoria.

Backed by the HIV research group Reach Nexus, the study will send 15,000 free self-test kits to participants across Canada to either use themselves or share with others in their social network.

Researchers will collect feedback six months later on the devices and how they can be used to connect members of the GBT2Q community with other sexual health supports, said Lachowsky.

Lachowsky hopes these insights can inform a strategy that will reduce barriers to screening such as access to health care, travel and wait times, cost concerns and discrimination against sexual and gender minorities.

In 2018, nearly half of new HIV infections in Canada were among gay, bisexual and other men who have sex with men, according to the Public Health Agency of Canada.

“The reality is that even in a pandemic, people are still having sex with each other,” said Quinones, who is part of the Community-Based Research Centre's community advisory committee on HIV self-testing.

Quinones said HIV self-test kits allow members of the GBT2Q community to take charge of their own health and feel empowered within a medical system that's long been biased against them.

Andre Marcotte, an outreach worker for homeless youth in Vancouver, said HIV self-testing can only reach its full potential if it's matched with an effort to make these devices free and accessible.

Marcotte said he's counselled a few homeless youth through potential HIV exposures, and the hurdles of getting them tested at a sexual health clinic during the COVID-19 crisis.

“It would be a huge benefit to have these HIV testing kits in places ... where these people are going to access them, because oftentimes, they're mistrustful of health services,” said Marcotte, noting that queer and transgender youth are overrepresented in the homeless population.

“It would definitely be easier if my team had access to these self-testing kits to just hand to our clients.”