Study shows novel coronavirus can live on skin for 9 hours, but what does that mean? 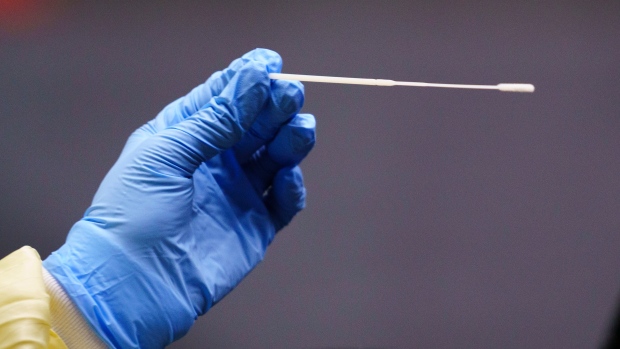 A nurse uses a swab to perform a test on a patient at a drive-in COVID-19 clinic in Montreal, on Wednesday, October 21, 2020. THE CANADIAN PRESS/Paul Chiasson

A recent study suggests the novel coronavirus can live on human skin for up to nine hours, but experts say those findings aren't as alarming as they sound.

The study by Japanese researchers, published earlier this month in the science journal Clinical Infectious Diseases, looked at how long viruses can survive on human skin based on samples collected from cadavers about a day after death.

The findings suggest that the virus that causes COVID-19, SARS-CoV-2, can remain active for 9.04 hours -- nearly five times longer than the survival time of the pathogen that causes the flu.

The study also showed that an 80 per cent ethanol-based sanitizer can kill the novel coronavirus in a matter of 15 seconds.

Cynthia Carr, an epidemiologist in Winnipeg, says that's her main take-away from the study.

"It's an important public health message to remind people that even though the virus can last basically a full workday in a lab setting, you can quickly get rid of it if you just wash your hands," she said.

"It's not about panicking and having a full-body shower every time you get home. It's about remembering that if the virus is on your hand and you wipe your nose or put your fingers in your mouth, that's where the opportunity is to get infected."

Colin Furness, an infection control epidemiologist at the University of Toronto, says people are less likely to contract COVID-19 from touching a surface than from having close contact with an infected person.

He suspects the reason for that has to do with the viral dose on surfaces versus that in droplets or aerosols. Coming into contact with small viral load on a surface likely won't result in a severe infection, he says, adding that our bodies may fight off a very mild case without us even realizing we have it.

"I don't think (this study) is anything we need to be too concerned about," Furness said. "If it were, clinically we would be seeing that touch matters a lot more. And we're not."

Furness says public health strategies over the last few months have emphasized mask-wearing and avoiding gatherings "because they matter more."

However, even someone who's asymptomatic or mildly symptomatic can transmit the virus, so Furness says it's still important to wash your hands on a regular basis.

"I don't want anyone thinking that touch doesn't matter at all. You can still pick up the virus from touch," Furness said. "And you can pick up a different virus during COVID that weakens your body, and then if you do get COVID you can have a worse outcome."

The experts say it's also important to remember that studies done in lab settings, under perfectly controlled conditions, don't necessarily translate to the outside world.

Carr said the study in Japan was done in warm, humid conditions, which the virus is known to thrive in.

Using skin samples from immobile cadavers could also play a role in how long the virus remained on that surface, she added.

"My understanding is that the virus is relatively fragile," Carr said. "So I don't know how long it would be detectable on your hand in a real-life situation where you're moving around."

Plenty of lab studies have been conducted since the pandemic began showing how long the novel coronavirus can survive on different surfaces. Another recent one found the virus could live on banknotes for up to 28 days.

But Furness says to take that with a grain of salt.

"It's almost like a little perverse competition to see who can keep COVID alive the longest, and I don't think that's fair," he said. "Saying it can survive on a banknote for several days -- OK, when the banknote is in the dark not being disturbed, and with perfect humidity and so on and so forth. That's when it becomes a bit dodgy."

And detecting the virus on a surface isn't the same as determining whether it's strong enough to infect someone, Carr warned.

"That's where we have a lack of knowledge," she said. "It could be (detectable) for nine hours, six hours, 12 hours, but again the main take-away for me is how quickly it can be eradicated if you just wash your hands."

For Furness, the interesting part of the Japan study was its comparison to the regular flu virus, which lasted on average slightly less than two hours on skin surfaces.

He says that may provide a potential clue as to why the novel coronavirus is so transmissible.

"It sheds a little bit of light on the fact that this is a tough customer, that this is a relatively hardy virus compared to flu," he said. "And it would help explain why this is so much more contagious than something like the flu."