Subway service has now fully resumed on Line 1 after a train derailment halted service on a portion of the line for nearly seven hours.

The TTC said a work car derailed at St. George Station at around 5:30 a.m., prompting officials to shut down train service between St. Clair West and Union stations.

At one point, the transit agency brought in 100 shuttle buses to supplement service.

To help mitigate the disruption, the TTC boosted service on east-west routes, putting additional streetcars and buses on the roads and adding more subway cars on the Yonge Street side of Line 1. The TTC’s GO protocol was also put in place, allowing customers to use their TTC fare on GO Transit. 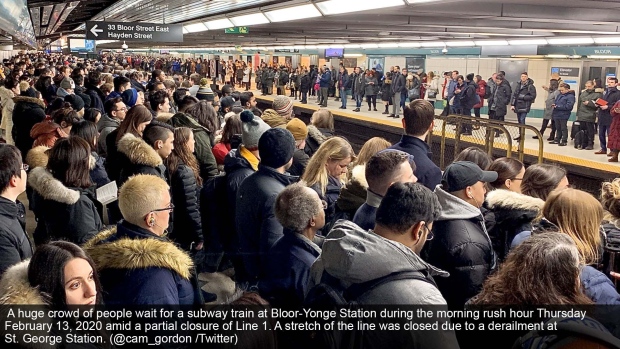 Despite an assurance that the derailment would not be as disruptive as the partial derailment of a train on Line 2 last month, it took more than six hours to get trains back up and running.

“This is quite a different situation,” TTC spokesperson Kadeem Griffiths told CP24 shortly after service was suspended.

He said it likely wouldn’t take as long to resolve the issue due to the fact that work cars are much smaller than regular subway trains.

Commuters expressed frustration Thursday at the repeated problems on the city's subway system.

“It seems like shuttle services are the new thing and taking the actual train isn’t,” one commuter said outside St. George Station on Thursday morning. “The services are just not reliable.”

Mayor John Tory apologized to commuters for the inconvenience this morning.

"It was the worst possible time for that to happen," he said at city hall on Thursday morning. "There will be of course a complete investigation into why it happened." 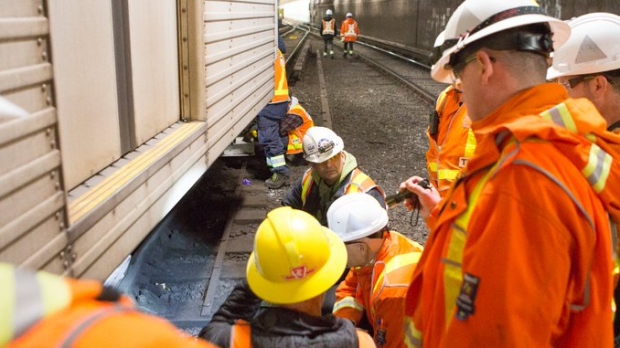 TTC CEO Rick Leary said the transit agency has not yet determined what caused the derailment but confirmed that officials will investigate.

He said the derailment was “complex,” which is why it took so long to restore service.

“Every incident like this we do an investigation… We don’t want this to happen again and that’s why we took our time this morning. When you are doing this, you want to do it right,” Leary said.

“You hope you get lessons learned, no doubt, because you want to prevent it from happening again. But for the customers there today, it is very bothersome to them and we recognize that.”