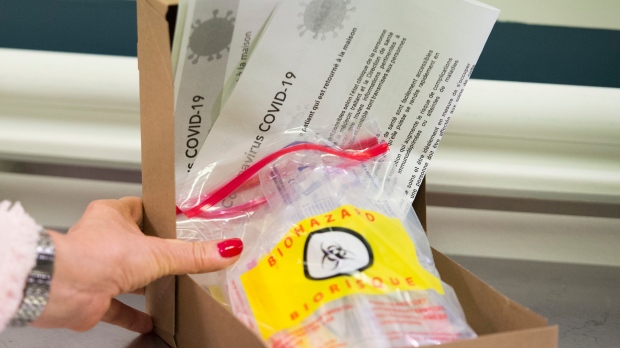 A COVID-19 test kit is shown at a coronavirus evaluation clinic in Montreal, Tuesday, March 10, 2020. THE CANADIAN PRESS/Graham Hughes

An Ontario man who travelled to Toronto last week to attend a conference has been confirmed to have COVID-19, health officials said Tuesday.

Health officials in the Sudbury and Manitoulin districts announced the positive test in a news release Tuesday night. The development marks the first confirmed case of COVID-19 in the area.

According to the release, the man was experiencing a cough and shortness of breath and presented himself to the emergency department at Health Sciences North on March 7. He was subsequently discharged home into self-isolation.

Health officials said that while the investigation into his case is still ongoing, he attended the Prospectors & Developers Association of Canada convention in Toronto on March 2 and 3.

On the PDAC website, conference organizers say the mineral and mining convention boasts an attendance of nearly 26,000 people from 132 countries. It took place from March 1 - 4 at the Metro Toronto Convention Centre in downtown Toronto.

The conference website also listed a number of additional health measures followed this year in light of concerns around the coronavirus. They include increased cleaning of “high-volume touchpoints,” such as touchscreens and door handles, and increased availability of hand sanitizer.

However organizers said that there were “no programming changes scheduled for PDAC 2020” due to COVID-19 and that the convention would “continue as planned.”

Public Health Sudbury & Districts said they are “actively engaged in follow up” and are collaborating with the Ministry of Health.

“Our focus is on breaking the chain of transmission to limit the spread of infection and as a precautionary measure, we are asking those who attended PDAC 2020 to monitor for symptoms for 14 days,” said Dr. Penny Sutcliffe, Sudbury’s medical officer of health.

Anyone who develops symptoms is being advised to self-isolate and contact their local health unit.

Health officials did not say how the man travelled to and from the conference.

On Tuesday, the federal government released new guidelines for organizers of major gatherings in light of the concern around possible COVID-19 transmission.

A number of other major events that were set to take place in Toronto in the coming weeks and months have recently been cancelled, including a major technology conference, a Shopify convention and a Pearl Jam concert.

On Wednesday, Toronto Public Health issued a statement saying that they are working with health officials in Sudbury and are “actively engaged in investigating this person's potential exposures in Toronto.”

“Toronto Public Health is conducting a detailed investigation of this person's activities while they were in Toronto,” Toronto’s medical officer of health, Dr. Eileen de Villa, said in the statement. “As we do for all investigations, we actively identify people who may have been directly exposed to COVID-19 and actively follow up with them.”

DeVilla said the case is “not surprising” given the global circumstances. She encouraged anyone who has recently attended a large gathering to monitor their health.

“If symptoms including a cough, fever or difficulty breathing develop, then you should contact your local public health department,” she said.

However she noted that the risk of transmission is low for people who were simply in the same room with or walked by someone with COVID-19.