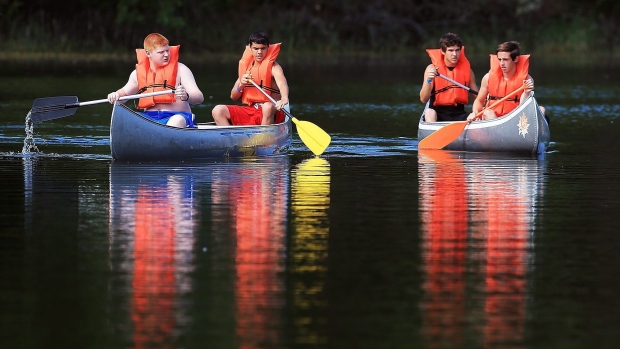 Campers work on their canoeing skills on Tuesday, June 14, 2016, while participating in a Boy Scouts camp at Camp Augustine south of Grand Island, Neb. The Ontario government's decision to cancel overnight summer camps due to the ongoing risks presented by the COVID-19 pandemic is both medically necessary and potentially disastrous, according to people involved with the industry. THE CANADIAN PRESS/AP-Barrett Stinson/The Grand Island Independent via AP

The Ontario government's decision to cancel overnight summer camps due to the ongoing risks presented by the COVID-19 pandemic is both medically necessary and potentially disastrous, according to people involved with the industry.

Families and camp operators all acknowledge the wisdom of the move, announced by Premier Doug Ford earlier this week at the same time that he said schools would remain closed for the rest of the academic year.

But parents said the decision still represents a major disappointment for kids barred from their usual physical and leisure activities since widespread shutdowns took effect in mid-March. And camp operators, while praising the government's focus on public health, say the looming financial losses they face could fundamentally transform the industry.

“This has huge potential of devastating a significant portion of our industry,” said Howie Grossinger, who co-owns an overnight camp near Bancroft, Ont., and a day camp in Markham, Ont. “...The thought of not having revenue is very difficult. We're a very unique, seasonal industry.”

Grossinger said most camps typically receive a portion of their annual revenue in the fall when parents pay deposits that are used to cover costs such as property maintenance. The bulk of the revenue then flows in the spring when families pay off their balances.

Grossinger said that while the initial deposits have largely been spent, camps will soon find themselves without any cash flow at all as they refund balances paid down while the fate of the camping season was still up in the air.

He described the current circumstances as “unprecedented,” saying past upheavals such as world wars and even previous public health crises hadn't shut down the industry to the same degree as COVID-19.

“During those difficult times, parents could look to camp as a respite for the difficulties they were going through,” he said. “...I know there was a polio scare back in the mid-40s in Toronto, and some families felt going to camp and the fresh air were important.”

But Grossinger said governments had little choice but to cancel the overnight camping season in light of the ongoing global pandemic. Nova Scotia, British Columbia and Alberta have all made the same move, with Quebec officials saying such a cancellation seems likely in that province as well.

Day camps are allowed to proceed in most provinces, including Ontario. Quebec announced on Thursday that the government would not rule out the idea of financial help for facilities that choose to open and must hire more staff in order to preserve public health measures.

Despite the green light from Ontario, Grossinger said he and his wife opted not to welcome day campers this year.

He said letting camp operate would also ensure hundreds of children were commuting back and forth throughout Toronto and the surrounding area, noting the logistics of offering traditional activities while enforcing physical distancing measures among kids would also pose a “monumental” challenge.

Those obstacles are helping one Toronto-area parent make peace with the loss of the camp season.

Julia Waiser, who lives in the York Region suburb of Thornhill, said her daughters were devastated to learn they would not be attending overnight camp as anticipated, but said the public health compromises that would have been necessary to protect staff and campers would have likely led to a disappointing experience.

Waiser said the activities at the centre of camp life, such as sleeping and eating alongside friends and taking part in group games and sports, would have been all but impossible to maintain while practising physical distancing and other protective measures.

“The moment that you start to change what camp is and change the atmosphere to the point where camp doesn't feel like camp anymore, the experience wouldn't be the same,” she said. “To have it be anything less than that wouldn't be worth it for the girls.”

The Ontario Camps Association, representing 450 day and overnight facilities across the province, agreed the government made the right call.

The association said it would continue to work with government and health officials to ensure day camps that choose to open this summer have the best possible advice to protect all involved.

Prime Minister Justin Trudeau acknowledged the sector's struggles on Thursday, noting it's one of many struggling with the economic hardships caused by COVID-19.

He said individual regions are best positioned to make decisions on whether camps are safe to operate.

“We know that since the beginning, COVID-19 has spread more in places like camps, work camps and in institutions that are more closed off, where people live and work all day long in close proximity,” he said in French. “So those considerations regarding summer camps will have to be done with a lot of sensitivity and vigilance.”