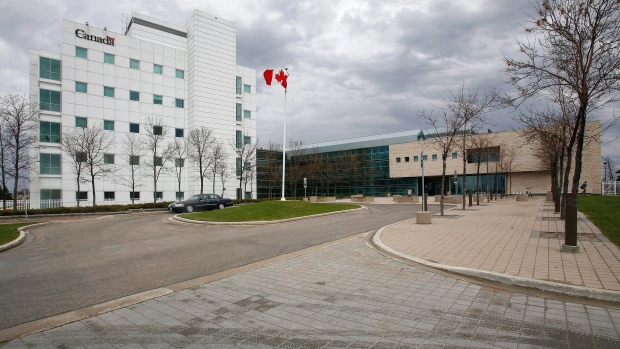 The National Microbiology Laboratory is shown in Winnipeg on May 19, 2009.THE CANADIAN PRESS/John Woods

The highly contagious coronavirus variant from Britain has a tell or a “funny pattern” that allows mindful lab technicians to flag possible positive samples during conventional PCR testing, making it quite easy to detect, the head of Canada’s largest public microbiology lab says.

Dr. Guillaume Poliquin of the Federal Microbiology Laboratory told CP24 the B.1.1.7 strain of the novel coronavirus, which is about 50 per cent more transmissible than other variants, produces a genetic deletion that is noticeable on a standard PCR test for infection, allowing suspect samples to be flagged and followed up on through the contact tracing process before genomic sequencing is carried out.

“It might be here,” Poliquin said of how labs should treat the signal. “Let’s sequence that one.”

But the South African variant, dubbed 501.V2 and also considered far more transmissible than other coronavirus variants, does not present a special tell.

It has already been detected in one person in Alberta.

In order to find it, a lengthy genomic surveillance screen must be completed every time.

Provinces, supported by the microbiology lab in Winnipeg and a raft of laboratories across Canada, are accelerating expansion plans to test higher and higher numbers of positive PCR test samples for the new more transmissible variants of the virus using genomic sequencing as they start to pop up in Canada.

Poliquin says that genomic sequencing involves taking a specimen and mapping out its entire genetic profile, generating thousands of characters.

“PCR diagnostics is identifying a book by its cover, you take a small amount of genetic material find that the sequence is present and say COVID is there,” he said.

“But sequencing is like reading the whole book, using not only the chemistry of the test but also sophisticated bio-informatics work to analyze that sequence.”

Since the fall, when the B.1.1.7 and 501.V2 variants were first detected, Canadian labs accelerated genomic testing that was already underway, eventually mapping five percent of all samples collected in 2020, or more than 25,000 specimens.

In Ontario, Public Health Ontario says it is increasing the number of samples its submits for genomic screening from 300 to nearly 600 per week, or about 12 per cent of all positive tests in the province, using the past week’s volumes.

“Given the rapid growth of cases in certain areas of Ontario, PHO is actively conducting surveillance of positive samples from health units in Toronto, Peel, York, Windsor-Essex, Durham and Hamilton, and other health units with rapid growth rates as they emerge in collaboration with the Science Advisory Table,” a Public Health Ontario spokesperson told CP24.

Ontario has so far found 14 examples of the British variant, including three in York Region with no recent travel history, sparking concerns the new variant is circulating undetected.

Ontario Chief Medical Officer of Health Dr. David Williams said the British variant is transmissible in a way that most Ontarians might not comprehend.

“It takes a face to face chat with someone standing two feet away with no mask on for four to five minutes and you’re going to transmit it. So it added even more emphasis why we have to be stringent and careful.”

He said the variant’s spread in Britain is having a terrible impact, recently putting daily deaths above that of the United States on a per capita basis.

“It has taken off and it’s having horrendous effects even as they carry out their vaccination program. We don’t want to go there.

When asked if more needs to be done to restrict air travel to keep B.1.1.7 out of Ontario, Williams said he has asked the federal government for “stricter measures.”

Currently, incoming air passengers must present a negative PCR test before boarding a plane that will land in Canada.

Once they arrive at Pearson, they can submit to second PCR swab test before proceeding to self-isolation.

Conducting a genomic screen is much more laborious than a basic PCR test.

While a rapid test can deliver positive results in 15 minutes and a PCR test can be completed in as little as four hours, genomic screens take at least a day in the best case scenario.

“As a lab if you dropped everything you were doing and focused on that, (it takes) 24 to 48 hours,” Poliquin said. “But on average the typical life cycle is about three to five days.”

Poliquin said the rate of genomic screening puts it on par with most European nations looking for the variant.

But our American neighbours present a major risk.

They are not actively expanding surveillance for the new variants.

Earlier this week, Ontario officials suggested the B.1.1.7 variant may be circulating at low levels in the province.

Poliquin said fearing its spread and predicting when it will become dominant is not productive.

“I don’t think anyone can know with any certainty – what Canadians can do to respond to these variants is the same as what we’ve done to respond to SARS-COV-2 to date,” Poliquin said, urging people to stay home as much as possible, use masks and wash their hands frequently.

Across the globe, examples of the considerable increase in transmissibility of the new variants are becoming more clear.

In Brisbane, Australia, a couple returning from Lebanon became infected with COVID-19 while staying at an isolation hotel, as is mandatory in that country.

Only through genomic sequencing was it revealed that they got the B.1.1.7 strain of the virus from a couple from Britain who were staying in an entirely different room down the hall from them on the same floor of the hotel.

Public health officials believe aerosol transmission through vents in the hotel may have been the vector of transmission.

Poliquin said the public should know that even though there is evidence the new variants are not any more deadly, letting them run rampant will lead to much more illness, and by definition, more death.

“If you’re more efficient in your ability to transmit, statistically you will have more individuals who will have a more severe case; your chances or encountering severe illness is higher.”