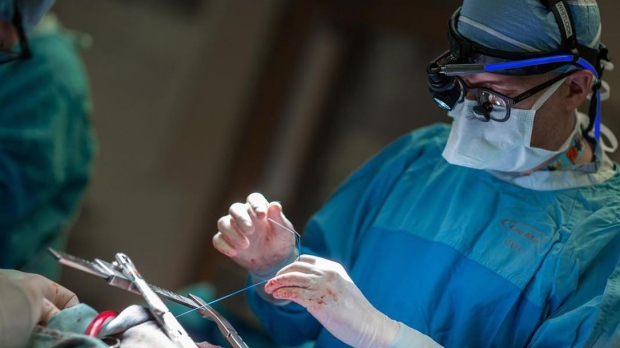 A simple surgery to remove a piece of unnecessary tissue in the heart could prevent strokes in patients with a common condition that requires them to take blood thinners, says the Canadian lead author of a study involving about 4,800 people in 27 countries.

Dr. Richard Whitlock, a cardiac surgeon for Hamilton Health Sciences, said when blood being pumped through the heart pools in the left atrial appendage, it may form a clot that could escape and block the blood supply to the brain and raise the risk of a potentially fatal stroke. But Whitlock says getting rid of that appendage in the heart cuts that risk by 33 per cent for patients with atrial fibrillation, which is characterized by an irregular heart rhythm.

The findings suggest a quick surgery, involving the removal of the appendage that's about as useless as the appendix, could be adopted around the world “immediately” through a change in practice for 15 per cent of heart surgery patients living with atrial fibrillation and taking blood thinners, Whitlock said.

“This will open a new paradigm for stroke prevention in atrial fibrillation,” Whitlock said of the results of the McMaster University-led study that was published in the New England Journal of Medicine on Saturday, when it was also presented at a conference of the American College of Cardiology.

Whitlock said consenting patients undergoing cardiac surgery for other reasons were randomly selected for an additional operation to remove the left atrial appendage, and their results were compared with those who only took medicine.

Blood thinners, which prevent clots, reduce the risk of stroke by up to 60 per cent. Whitlock said cutting out the appendage shrinks that risk by a further 33 per cent, adding those combined therapies will greatly benefit patients with atrial fibrillation, which is responsible for 25 per cent of ischemic strokes.

The study began in 2012 and patients, with the average age of 71, were followed for a mean period of 3.8 years, he said.

All the surgeons involved in the study across 27 countries - including Canada, the United Kingdom, Australia, New Zealand, Germany, Russia, China and Brazil - are invited to events Whitlock is hosting on the findings, and a change in guidelines will be strongly recommended, he said.

“We will have a significant effort at knowledge translation in terms of getting the word out there of this benefit. And surgeons, hopefully, across the world, can immediately shift practice and start managing the left atrial appendage in these patients undergoing heart surgery, who have atrial fibrillation.”

Whitlock said it's been suspected since the late 1940s that blood clots can form in the left atrial appendage in patients with atrial fibrillation. Until now, however, he said there wasn't any definitive evidence to suggest the tissue could be removed to reduce the risk of stroke. Some surgeons have intermittently performed the procedure if they felt a patient already having heart surgery was not at high risk, he added.

Patrice Lindsay, who directs change in health systems for the Heart and Stroke Foundation of Canada, said that while blood thinners have been the gold standard in preventing blood clots and strokes, the study paves the way for the procedure to be widely adopted for heart surgery patients with atrial fibrillation.

As with other studies, the evidence will be reviewed and consultations with governments and experts would follow on ways to move the science into clinical practice, said Lindsay, a former cardiac nurse.

“We would put out public information for patients and families to understand what it's all about and why it might be a good thing and who would be eligible,” she said, adding development of guidelines and training of surgeons and nurses would also be part of the changes in health-care systems.

“It takes a bit of time, but you can move fairly efficiently through that process.”

This report by The Canadian Press was first published May 15, 2021.