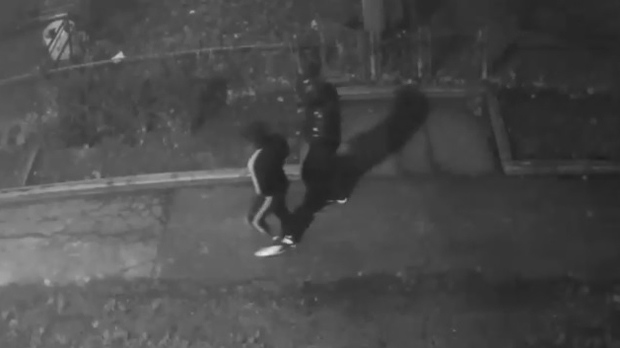 Two suspects in a shooting in L'Amoureaux on Dec. 3 are shown in a surveillance camera image. (TPS)

Toronto police have released surveillance camera footage of two male suspects wanted after a 26-year-old man was seriously injured in a shooting in the L’Amoureaux area of Scarborough on Sunday morning.

At about 4:55 a.m. Sunday, police were called to Chester Le Boulevard, near Finch and Victoria Park avenues, for a report of multiple shots fired.

Investigators say a 26-year-old male victim was getting out of his car when he was approached by two men brandishing handguns.

They fired numerous shots at him and then fled the scene on foot.

He was rushed by paramedics to a hospital trauma centre where he is currently in serious but stable condition.

On Tuesday, officers released a short surveillance camera clip of the suspects walking near the scene of the crime.

The first suspect is described as a black male with a medium build, standing five-feet-seven to five-feet-nine inches tall, wearing a dark jacket with a hood, dark pants and running shoes with white soles.

The second suspect is described as a man with a thin build, standing five-feet-seven to five-feet-nine inches tall. He was last seen wearing a dark Adidas tracksuit with white stripes and white running shoes.

Police are searching for a suspect after a male victim was shot in Scarborough's L'Amoreaux neighbourhood.