Suspect accidentally shoots himself in the leg while fleeing with stolen puppy: police 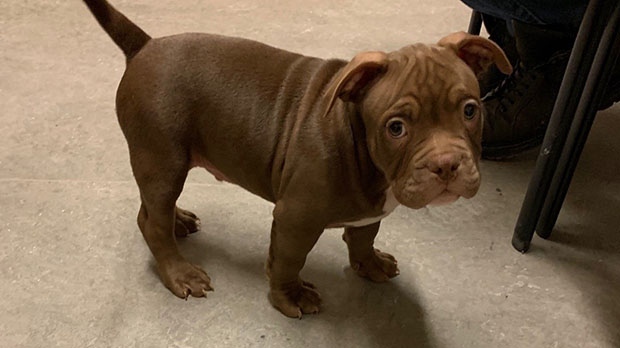 A puppy that was briefly stolen by an armed suspect in Brampton is shown. The puppy was returned to its owner unharmed after the assailant accidentally shot himself in the leg.

A man who allegedly stole a puppy at gunpoint in Brampton was taken into custody on Friday after he accidentally shot himself in the leg while running away from the scene of the crime.

Police say that the victim used an online classifieds site to arrange for the sale of the puppy, agreeing to meet the suspect in the area of Skylar Circle.

Once the victim arrived at the meetup location he handed over the puppy to the suspect but police say that the suspect refused to pay and instead pointed a firearm at the victim.

The suspect then ran away with the dog but as he fled he accidently shot himself in the leg and fell to the ground, police say.

Officers were then called to the area by the victim.

Once on scene, they located the suspect and he was taken to hospital with injuries that were considered non-life threatening. A Colt .45 firearm was also recovered at the scene, according to police.

“I know that in the end we did have a unharmed very happy puppy that was returned to the seller and the victim in this case was not physically injured so overall it ended well but I think it is something to be mindful of, especially when people are considering buying and selling online,” Const. Heather Cannon told CP24.

“If you are doing any buying or selling transactions we do have designated spots at three of our police stations and they have designated signage and there are cameras trained on the area.”

A 20-year-old Brampton man, whose identity has not been released, has been charged with robbery and firearm-related offences in connection with the incident.