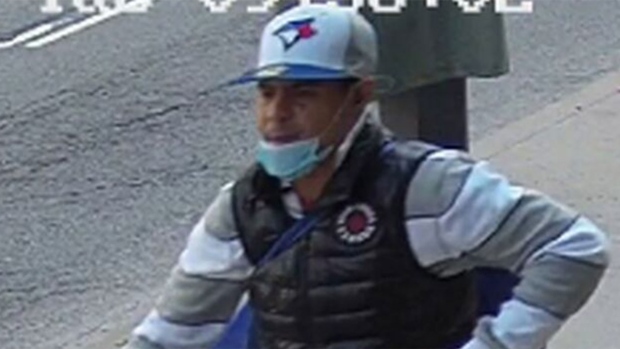 Toronto police have made an arrest after a package full of syringes was allegedly left outside a midtown elementary school on Tuesday morning.

Yesterday, at around 10 a.m., police responded to a call at Eglinton Junior Public School, in the area of Eglinton Avenue and Mount Pleasant Road.

Community safety team members told police they saw a man leave a package by the school which contained several syringes and other paraphernalia, police said.

“Some were new [syringes] in packages and sealed, some were not, some had caps on them," Det. Sgt. Scott Bradbury told CP24 Wednesday morning. "And they saw this person leave the package, they picked it up and they called police immediately.”

The man was seen leaving the school on a bicycle.

Tuesday evening, police released a photo of the suspect and asked anyone with information to contact investigators.

At around 5 p.m., Wednesday, police confirmed they had taken a suspect into custody at around 1:30 p.m.

Police said 44-year-old Anthony Purchase of no fixed address has been charged with mischief interfere with property and failing to comply with probation.

He is scheduled to make a court appearance Thursday morning.

“Nobody came into contact with the package from the school,” Wilson said to the media Wednesday morning.” The community safety team from the Roehampton residence saw the individual approach and intervened. He dropped the items and fled on his bike.”

Wilson added that no students or staff have reported any sightings of syringes or drug paraphernalia in recent months but there have been some sightings by members of the community safety team.

“The community safety team, which is here to support us from the Roehampton Residence, they come and sweep the school yard every day before school starts,” Wilson said. “And they’re on site during entry and dismissal and throughout the day as well.”

Earlier this month, the city announced that it would create a community safety team to patrol the neighbourhood in the wake of violent incidents at the old Roehampton Hotel, near Yonge Street and Eglinton Avenue.

Since July, the Roehampton site has been used as a temporary shelter to reduce crowding in other city shelters during the COVID-19 pandemic.

But the shelter has come under some scrutiny from nearby residents who are concerned with what they are calling an increase in violence, including the stabbing of a shelter client outside the doors to the facility in August.

To address concerns, the city released a plan calling for a community safety team and mobile security teams to patrol nearby schools and the surrounding neighbourhood.

The Roehampton hotel has been leased by the city for two years to serve as a temporary shelter site.