Suspect in custody after reports of shooting at B.C. detachment, no one injured 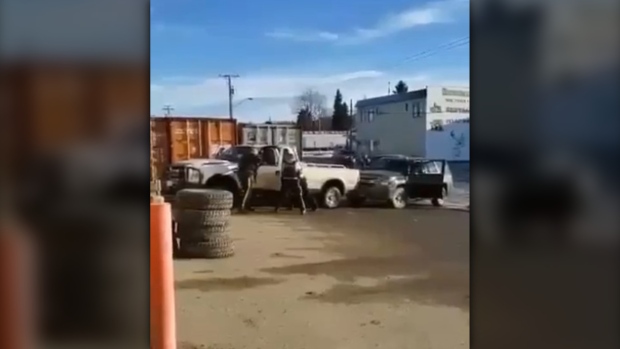 Police surround a white pickup truck in the northern B.C. community of Vanderhoof, in video posted to Facebook on Nov. 25, 2021. (Alison Johnny)

VANDERHOOF, B.C. - Police say a suspect is in custody after officers responded to reports of a shooter at an RCMP detachment in northern British Columbia.

Cpl. Madonna Saunderson said there are no reported injuries.

Mounties said they responded to reports of a person with a long gun just after noon on Thursday. They said the person was targeting the detachment in Vanderhoof, west of Prince George.

The person was then seen driving around the area. RCMP said a lone male suspect, considered armed and dangerous, was believed to be in a white Ford pickup truck with an extended cab.

A local emergency alert was issued, and police asked residents to stay inside and lock their doors.

RCMP said officers apprehended the suspect about an hour later following a brief car chase, in which one police vehicle was rammed.

The alert was later cancelled, and residents were told it was safe to resume normal activities.

“At this time, there is nothing to indicate any further ongoing threats to the public,” Saunderson said in a release.