Suspect in ISIS-inspired assault refuses to appear for third time 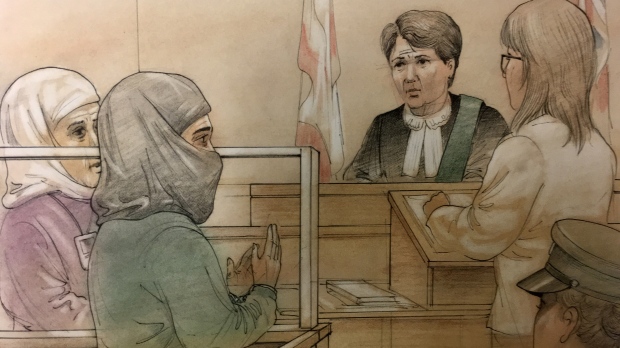 A woman facing terrorism offences in relation to an attempted assault inside a Canadian Tire store will be removed from her jail cell by force and physically compelled to appear before a Scarborough court next week after she refused to do so for a third time on Thursday.

After lawyers and the judge agreed to allow her to appear via video link from the Vanier Centre for Women on Thursday morning, court staff informed them that 32-year-old Rehab Dughmosh refused to leave her cell.

On July 21 and Aug. 15, Dughmosh declined to leave her jail cell for scheduled court appearances, despite at least one warrant issued to compel her to do so.

She is accused of walking into a Canadian Tire store in Cedarbrae Mall on June 3 and allegedly assaulting staff and patrons with a golf club in the store’s paint section.

She later allegedly drew a large knife from under her clothing, uttering death threats throughout the incident.

She also expressed support for the so-called Islamic State and was later restrained and disarmed by store staff. One store employee suffered non-life-threatening injuries.

She was originally charged with assault with a weapon, threatening death and carrying a concealed weapon.

Last month, the RCMP added new charges including four counts of attempted murder, alleging all of her conduct was in support of a known terrorist group, the so-called Islamic State.

Federal security officials also allege Dughmosh left Canada on April 24, 2016 to travel to Syria but was intercepted and detained in Turkey. She was returned to her home without charge.

In a previous appearance on June 6, Dughmosh told the court through an interpreter that she had pledged allegiance “to the leader of the believers —Abu Bakr al-Baghdadi,” the leader of the so-called Islamic State.

When she has appeared, Dughmosh has indicated she wishes to represent herself.

A court-appointed amicus curiae, Ingrid Grant, has said that Dughmosh should undergo a medical assessment of her criminal responsibility, as there are concerns about her mental health.

Amicus curiae assist the judge with decision-making and ensure “all relevant evidence and arguments are properly presented,” according to the Justice Department.

She will be physically compelled to appear via video link on Monday morning at 8:30 a.m.