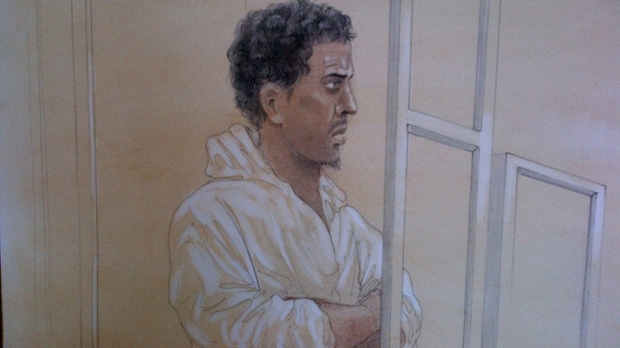 Hanad Mohamed is pictured in a courtroom sketch. Mohamed is charged with first-degree murder in the death of Anthony Smith.

One of the accused in the fatal shooting of Anthony Smith has been remanded into custody until his next court appearance on June 21.

Smith was gunned down after leaving a club near King and Portland streets in the early hours of March 28.

The suspect’s lawyer, Marsha Kideckel, said her client was distraught about the allegations.

“He is not a person who has been in trouble with the law” she said. and is very distraught with the allegations. “This is a shock to him and a shock to his family.”

The suspect was arrested in Fort McMurray last Friday.

Hanad Mohamed is charged with first-degree murder and attempted murder in connection with the March 28 shooting, which also wounded another man.

Nisar Hashimi, 23, was arrested in April and is also facing a charge of first-degree murder and attempted murder in connection with the incident.

Smith has made headlines in recent weeks for his possible connection to Toronto Mayor Rob Ford.

Smith is reportedly pictured alongside Ford in a photo that has been circulating in the media.

The photo surfaced alongside reports in the Toronto Star and Gawker that alleged a video exists in which Ford appears to be smoking from a glass pipe.

Although police did interview someone in the mayor’s office after they received a tip about a possible connection between the victim and the video, the homicide squad has since said the interview was not related to Smith’s murder or any murder.

Speaking with CP24 Friday, the lawyer for the suspect would only say that she is aware of the alleged link between Smith and the mayor.

“I understand that, but I have no information on that,” Marsha Kideckel said.