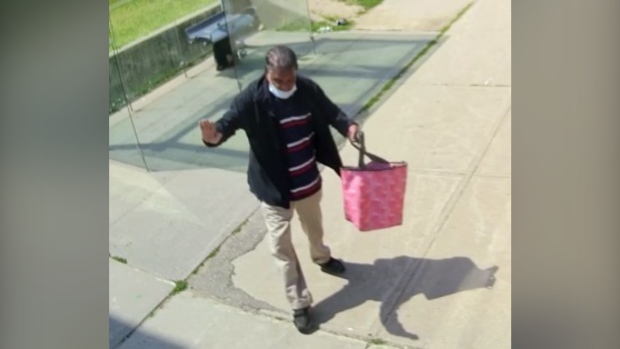 A surveillance video image of a man wanted in a sexual assault investigation. (Toronto Police Service)

Toronto police are looking for a man who allegedly sexually assaulted a teenage girl in Scarborough last week.

Police said they responded to a sexual assault call in the area of McCowan Road and Finch Avenue East on June 30, just before 4 p.m.

A 15-year-old girl was onboard a TTC bus travelling south on McCowan Road when a man got on the bus and seated beside her, police said.

When the girl proceeded to exit the bus, the man allegedly sexually assaulted her.

On Sunday, police released surveillance video images of the wanted suspect. He is described as five-foot-three, weighs about 200 lbs. with a medium build, thin receding black hair and brown eyes.

Police said he was wearing a blue jacket, a blue and maroon and white striped polo shirt, khaki pants, black running shoes with white soles and was carrying a pink bag.

A surveillance video image of a man wanted in a sexual assault investigation. (Toronto Police Service)