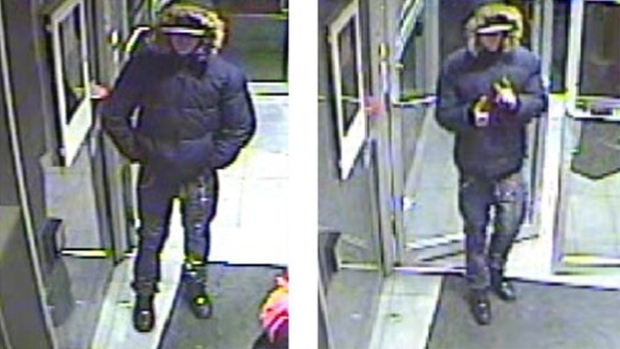 Toronto police have released this photo of a suspect wanted in connection with a downtown stabbing. (Toronto Police Service handout)

Police are searching for a suspect who allegedly stabbed a man in the city’s downtown core last week.

Investigators say at around 4:20 a.m. on Friday, an altercation broke out between two men in the area of Yonge and Elm streets.

At one point during the fight, police say, one of the males was stabbed multiple times.

The suspect left the scene following the attack and has not yet been apprehended.

He was been described by investigators as a white male who is about six-feet tall. He is believed to be between the ages of 20 and 30 and has a thin build.

The suspect was last seen wearing a blue winter jacket with a fur hood, blue jeans with rips in the left leg, a black baseball hat with a flat, white rim and a white logo, and black shoes.

The male is considered to be armed and dangerous, police say.

Toronto police have now released photos of a suspect and are asking anyone with information about the case to contact investigators or Crime Stoppers anonymously.