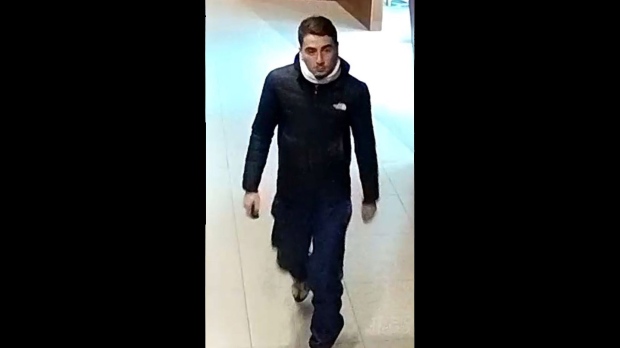 Police are trying to identify a suspect after a Canada Post worker was assaulted downtown. (Toronto Police Service handout)

Police are trying to identify a suspect after a postal worker was allegedly attacked and robbed at a downtown condo last week.

Police say at around noon on Friday, a Canada Post worker was inside a condo building in the area of Bathurst Street and Lake Shore Boulevard West when he was attacked by a suspect, who robbed him of his belongings.

The suspect is believed to be five-foot-nine and has short, dark hair. He was unshaven at the time of the robbery and was wearing a black North Face jacket, blue pants, and black and white running shoes, police say.

According to investigators, the suspect fled the area through alleyways heading east.

Officers have now released an image of the suspect and are urging any member of the public who spots him to contact investigators or Crime Stoppers anonymously.