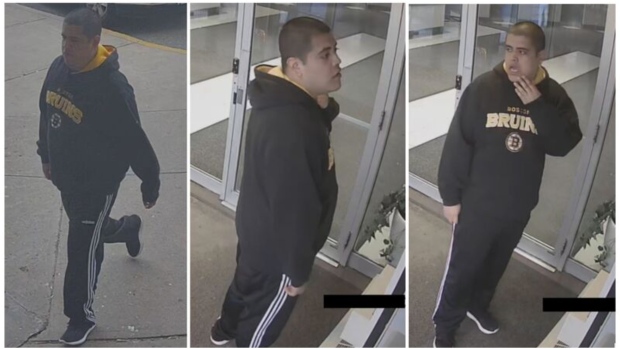 Toronto police are asking the public for help in identifying a suspect after a woman was sexually assaulted in Thorncliffe Park on Sunday.

At approximately 12:30 p.m., police said that a 47-year-old woman was in the area of Thorncliffe Park Drive and Overlea Boulevard when she was followed into the elevator of a residential building by an unknown man.

That’s when police say that the man sexually assaulted the woman.

On Monday police released surveillance images of the suspect. The man is described as having a heavy build, closely shaved black hair, and was clean shaven at the time of the incident. Police say he was last seen wearing a Boston Bruins hooded sweatshirt, black Adidas track pants with white stripes and black shoes.

Anyone with information related to the incident is asked to contact police directly at 416-808-7474. Tips can also be left anonymously through Crime Stoppers at 416-222-TIPS (8477) or online.

Toronto police define a sexual assault as any form of unwanted sexual contact. This includes, but is not limited to, kissing, grabbing, oral sex and penetration.