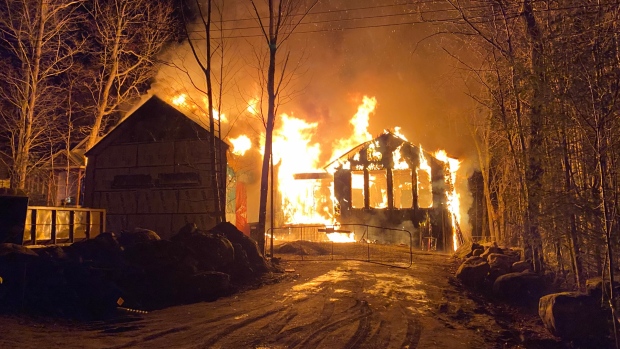 Paul Stanczak and Danielle Bablich's cottage, which was still under construction, is seen on fire in a suspected case of arson which left the structure, near Ontario's Georgian Bay, in ashes on Boxing Day, in a Dec. 26, 2021, handout photo. THE CANADIAN PRESS/HO-Danielle Bablich,

For Paul Stanczak and Danielle Bablich, the Christmas season came to an abrupt end on Boxing Day.

In a bleary state of shock, the couple learned their partially completed cottage on Ontario's Georgian Bay was ablaze after receiving a call from a neighbour at about 5:20 a.m. on Dec. 26.

Stanczak drove the three minutes from Bablich's parents' home to find the small chalet into which they'd already poured more than $425,000 destroyed in minutes due to a suspected act of arson.

“I just stood there on another neighbour's lot across the street ... and watched our dream in flames. And there's nothing you can do about it,” Stanczak, 44, said in a phone interview.

“It was one of the hardest things we've ever been through,” said Bablich, 37, who joined her partner at the cottage turned crime scene after calming their six-year-old son.

“I watched it just finish burning and collapse into itself.”

The Toronto couple had worked on the Scandinavian-style chalet for over a year, overseeing the project as trees were cleared, the foundation was laid and the structure went up, complete with drywall and electrical and water hook-ups by Christmas.

But they chose not to insure it, in part because they relied solely on their savings so there was no bank loan involved to require insurance.

Experts say a rose-tinted mindset can wind up with disastrous consequences for property owners who opt to forego coverage.

If there's no lender in the mix, homeowners can decide not to insure their building, its contents and the cost of accommodations should the house suffer damage.

But Insurance Bureau of Canada spokesperson Anne Marie Thomas says owners often neglect to consider liability insurance, which covers them in case of visitor injury and makes up part of most home insurance policies.

“I don't think it's as rare as people would imagine that it is,” she said of uninsured homes.

“Even if it was literally just a shack, it's always a good idea to have insurance ... for the liability portion.

“If someone trips, slips, breaks their arm, injures their head - the dog tripped them up on the way in the door, whatever - they can be sued by the person coming into the home,” Thomas said. “Even the mailman delivering mail.”

Stanczak and Bablich noted that the tradespeople they contracted had liability insurance and that the property was gated.

“Especially with no gas hook-up, there's no reason for there to be a fire either,” Stanczak said.

“Hindsight is 20/20. You never think it's going to happen to you,” Bablich added.

Anyone with information about the case is urged to contact Crimestoppers at 1-800-222-8477 or visit canadiancrimestoppers.org.

The couple are hoping a GoFundMe page titled, “Support Arson Victims Paul and Danielle,” might help them carry on with the home - they foresaw it as a rural haven and a legacy for their son - but are currently in project limbo.

“We don't want this to stop us and we want to continue,” Stanczak said. “But on the flipside can we actually go to a property where this much tragedy has befallen us?”