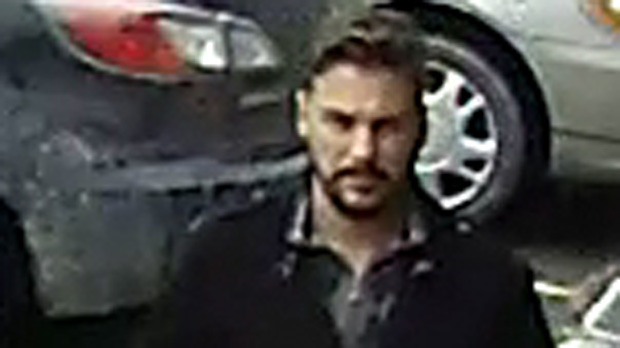 York Regional Police and the Barrie Police Service distributed this security camera image of a suspect wanted in sexual assault cases at tanning salons where women's feet were licked and their shoes stolen.

A suspect with a penchant for licking women’s feet in tanning salons and stealing their footwear has been arrested.

York Regional Police said an Innisfil man turned himself in on Wednesday. Mattieu Petrin, 28, has been charged with four counts of sexual assault, sexual interference with a person under the age of 16 and theft.

The police investigation began after an incident at a tanning salon near Yonge Street and 16th Avenue in Richmond Hill on Wednesday, Nov. 19. Police allege a man entered the salon and asked a woman there if he could see her shoe under the pretext of shoe-shopping for a relative. When the woman complied, the man “smelled her shoe and then fled with it,” police said.

A more aggressive incident was reported to York Regional Police the following day at a tanning salon near Yonge Street and Canyon Hill in Richmond Hill during which a man again asked a woman about her boots. Police said the man “grabbed the victim’s leg, removed her boot and sock and licked her foot without her consent.” He allegedly took off with the woman’s boot and sock.

Four hours later, the suspect struck again at a tanning salon in Barrie. Police there said he “dropped down on all fours, grabbed the employee’s leg and removed her footwear and then began licking her foot without her consent.”

York police said similar incidents have been reported in the Greater Toronto and Hamilton Area in Innisfil, Bradford, Aurora and Barrie. It is not known if footwear was stolen in all the incidents.