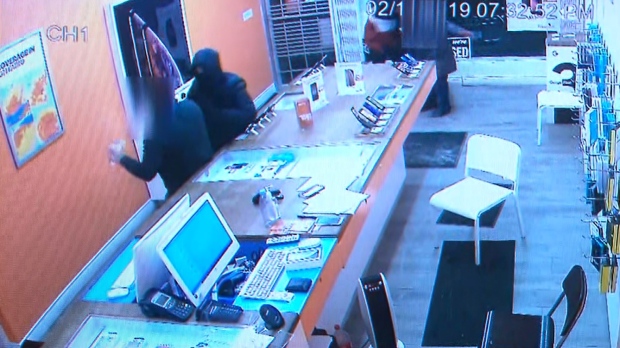 Suspects in one of 32 cellphone store robberies being investigated by police are shown in this surveillance camera image. (Toronto Police Service)

Police say that they have arrested nearly two dozen individuals and charged them with hundreds of offences as part of a months-long investigation into a rash of violent “takeover-style” robberies at cell phone stores across the Greater Toronto Area.

Police say that a total of 32 robberies, most of which targeted Freedom Mobile stores, occurred in Toronto, Peel, York and Halton regions between January and June of this year.

They say that in each of the robberies, a group of two to five males would enter the stores and “control employees and patrons using weapons, verbal threats and sometimes zip ties.”

The suspects would then order employees to fill large gym bags with smartphones before fleeing the scene in stolen vehicles, police say.

Seven stolen vehicles that were used as getaway cars have since been recovered, including two that were taken via carjacking.

In another robbery, which police have not made any arrests in, an 83-year-old patron was struck multiple times with an extendable baton before being dragged to the back of the store.

“It is concerning. These employees were absolutely victimized and terrorized by these thugs,” Det. Const. Jason Contant told reporters during a news conference on Wednesday.

Police say that a total of 22 male suspects have been arrested in connection with the robberies so far, including 11 young offenders.

The suspects are facing a combined 278 charges that relate to 23 of the 32 robberies.

Police say that they believe some of the suspects were recruited through social media.

“We learned through the course of our investigation that there were multiple groups of individuals that had some level of acquaintance; however they furthered their enterprise through the use of social media platforms in order to recruit new members to execute further robberies,” Det. Const. Bryan Magee told reporters.

Police say that the suspects would often “switch up their tactics, their clothing and the jurisdiction of their robberies” to evade law enforcement.

They say that some stores were targeted more than once with the robberies unfolding in a few minutes or less.

All told, police estimate that more than $100,000 worth of phones were taken during the robberies.

“Over the course of our investigation it was almost like this group was actually getting better at what they were doing. It would be no more than a minute or two minutes at the most (that they were in the stores),” Contant said.