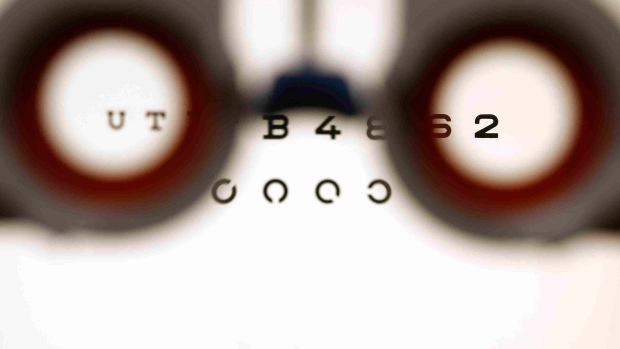 An optometrist holds glasses in front a lightbox during an eyesight test in Bremen, Germany, on Friday, Jan. 16, 2009. THE CANADIAN PRESS/AP/Joerg Sarbach

A decision to waive vision tests and other screening typically required to renew driver's licences for Ontarians aged 80 and older during the pandemic has some in the medical community raising concerns about the risks the move poses to those on the road.

Residents aged 80 and older need to renew their licence every two years. The process involves a vision test, an education session, a review of driving records, a screening exercise, and, if needed, a road test.

Last March however, in an effort to limit gatherings during the pandemic, Ontario paused licence renewal sessions for drivers aged 80 and older, and waived vision testing requirements. Seniors can currently renew their licences online with no testing needed.

Dr. Hall Chew, an ophthalmologist at the Sunnybrook Health Sciences Centre and an assistant professor of ophthalmology at the University of Toronto, said the situation is a difficult one.

“On the one hand, our seniors are the people who are at risk of getting sick from COVID, so any unnecessary appointments or exposure puts them at high risk,” he said.

“However, we know it is harder for patients over 80 to drive. They have more medical co-morbidities and vision problems, which we see quite commonly, and this is why renewal requirements exist in the first place.”

Chew said the suspension of renewal requirements for those 80 and older could lead to some being behind the wheel when they shouldn't be, posing a risk to everyone on the road.

He also noted that seniors are likely paying fewer visits to eye doctors during the pandemic, which means some may not yet have been told they should no longer be driving.

Chew suggested that vision testing, at minimum, be considered an essential renewal requirement. He said it could be done through virtual consultations or at Service Ontario sites with minimal contact and physical distancing.

Dr. Barry Goldlist, a geriatrician at the University Health Network and a professor of medicine at the University of Toronto, said licence renewals for those 80 and older should be seen as an essential service.

“Why did the government sites close down completely, while others are trying to find ways to provide safe essential services,” he said.

Goldlist said masking and physical distancing could at least help vision tests and and the education sessions that are part of senior licence renewals take place.

He also suggested that licences renewed online during the pandemic be extended only for six months, as opposed to the typical two years.

Several seniors said they wanted to ensure they could keep driving safely and hoped the pause on renewal requirements would not lead to any issues in the future.

Anita Longe, an 87-year-old retired nurse, said being able to drive has been particularly useful during the pandemic.

“I've always enjoyed driving. During COVID we are inside so much, at least we can go for a drive,” she said.

Longe, whose licence will expire in September, said she was a careful driver and appreciated the independence the skill brought. She said she was eager to be able to keep driving.

Hiroshi Ono, an 84-year-old vision science researcher at York University, recently renewed his license online and said he only learned about being able to do so from a friend.

“There was a good reason for having those tests and they are not doing them now,” he said.

Meanwhile, some seniors said they've been told by customer service agents that they can keep driving without renewals during the pandemic.

John Roce, an architect who turned 82 in September, said he had last been through the renewal process in 2018 and had not yet renewed his licence again. He said he wasn't sure how to do so.

“I was told by the licencing bureau to sit tight until I heard from the government,” he said.

Michael O'Morrow, a senior advisor at the Transportation Ministry said the renewal requirements were suspended “in order to support public health guidance to limit gatherings and encourage self- isolation.”

He said licences that had expired from March 1, 2019 onward could be renewed online.

“We strongly encourage everyone to renew their driver's licence,” he said.

The ministry did not provide statistics on the number of seniors who had their licences revoked since 2018.

This report by The Canadian Press was first published Jan. 23, 2021.

A digital signboard above the westbound lanes of Highway 417 advises motorists to stay home to prevent the spread of the COVID-19 pandemic in Ottawa on Sunday, April 5, 2020. THE CANADIAN PRESS/Justin Tang