Suspicious package that shut down Ambassador Bridge not an 'explosive device or capable of causing harm': police 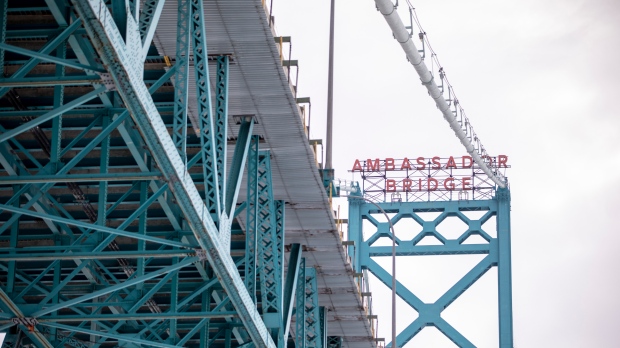 The Ambassador Bridge in Detroit on Monday, Feb. 7, 2022. Canadian lawmakers expressed increasing worry Tuesday about the economic effects of disruptive demonstrations after the busiest border crossing between the U.S. and Canada became partially blocked by truckers protesting vaccine mandates and other COVID-19 restrictions. (Annie Barker/Detroit Free Press via AP)

A suspicious package that prompted an hours-long closure of Windsor's Ambassador Bridge “wasn’t an explosive device or capable of causing harm,” police say.

Shortly before 9 p.m. Sunday, the Windsor Police Service (WPS) received a report about a suspicious locked box found inside a car that had been pulled over on the Canadian side of the Ambassador Bridge.

The area was immediately evacuated and members of the force’s explosives disposal unit (EDU) were called to the scene.

Access to the Ambassador Bridge was eventually restored in the early morning hours.

In an update posted on Twitter on Monday, the Windsor Police Service (WPS) said that after a doing a series of precautionary tests members of their explosives disposal unit (EDU) opened the package and found an electronic scale, drug paraphernalia, and suspected narcotics.

“The case has been turned over to the Canadian Border Services Agency for investigation,” Windsor police said.