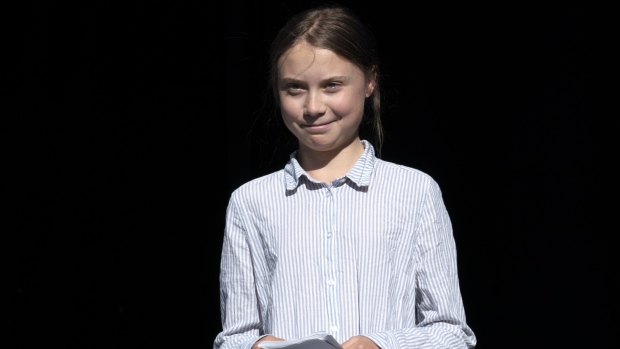 Swedish activist and student Greta Thunberg walks off the stage after addressing the Climate Strike in Montreal on Friday, Sept. 27, 2019. The Alberta government won't seek out a meeting with teen Swedish climate activist Greta Thunberg, but Environment Minister Jason Nixon says he hopes she takes the time to learn about the province's oil and gas industry. THE CANADIAN PRESS/Paul Chiasson

EDMONTON - Swedish activist Greta Thunberg is planning to be at the Alberta legislature Friday for a climate strike.

Climate Justice Edmonton says the 16-year-old Stockholm student will join activists in a march from a downtown Edmonton park to a rally at the legislature.

Thunberg is currently touring North America and took to social media on the weekend to say she will be visiting Alberta in the coming days.

Alberta Environment Minister Jason Nixon has said that the Alberta government won't seek out a meeting with Thunberg, but hopes she takes time to learn how the province has some of the greenest oil and gas rules in the world.