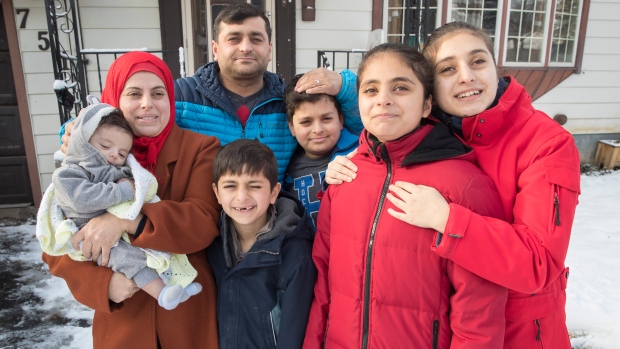 The Darrouba family, Hadi, left to right, Nadia, her husband Zoheir, Akram, Mostafa, Israa and Aya pose for a portrait in front of their home in Peterborough, Ont., Sunday, Dec. 5, 2021. The family members are among nearly 46,000 Syrian refugees resettled in Canada by April 2017 under a program introduced by the Liberal government in 2015 to make it much easier for Syrian refugees to reach Canada. THE CANADIAN PRESS/Fred Thornhill

PETERBOROUGH, Ont. - The living room at Zoheir and Nadia Darrouba's home is a hive of activity in the late afternoon - their older children, just back from school, are taking turns carrying around their baby brother as their parents look on.

It's a simple scene but one that makes Zoheir Darrouba feel at home in the mid-size Ontario city the Syrian refugee family of eight has now put down roots in.

“We have settled here. We cannot live outside Peterborough,” he says. “It's a good and quiet city. There are not problems here ... People are helpful and nice.”

The family is among nearly 46,000 Syrian refugees who were resettled in Canada under a program introduced by the Liberal government in 2015. The first flight carrying Syrian refugees landed in Toronto on Dec. 10, 2015, exactly six years ago.

The Darroubas, who made their way to Canada under the resettlement program in November 2016, used to live in Idlib, in northwest Syria, one of the first regions where local uprisings escalated into widespread violence. The family lived for a period of time in Lebanon before finding themselves settling in Peterborough.

Now, as they consider themselves firmly established locals, the family is looking to help Afghan refugees who've started arriving in the city following the Taliban's takeover of Kabul earlier this year, although the pandemic has made that effort a bit more complicated.

“There are several (Afghan) families here ... They are in quarantine, unlike before,” said Darrouba, who wants to offer support because he knows first-hand how hard starting over in a new country can be.

“When we came here, we didn't know anyone here. If someone showed up to visit us, we would feel it's great support.”

Darrouba currently works as a driver delivering COVID-19 PCR test samples for local pharmacies in Peterborough to a lab in east Toronto.

The family's five older children, ranging in age from eight to 16, are all doing well at school, their father says, while their mother is staying home to care for her two-month-old.

“In my first days in Canada, I used to look at the snow from the window and cry thinking when the winter will be over,” she recalled. “We are very comfortable now. My children grow up here. They don't know Syria.”

Two of her daughters, who are blind, say they're well-supported at school and feel set up for success.

“If I compare where I was and where I'm now, it's a huge achievement ... I used to speak English but it wasn't so good. Now my English is a lot better ... My grades are very good,” said Aya Darrouba.

The 16-year-old, like her father, said she feels drawn to helping Afghan refugees who are now beginning a new chapter, just as her family did.

She volunteers with a local settlement agency that's helping Afghan refugees and, since the pandemic has made it challenging to meet in person, recently helped it make a video offering advice to the newcomers.

“I just tried to make them feel at home,” she said of the video. “I told them your first days in Canada will be difficult but you will get used to the country.”

The federal government has committed to resettling 40,000 Afghan refugees, with 3,625 now in Canada, including about 80 in Peterborough, according to government data.

Marwa Khobie, executive director at the Syrian Canadian Foundation, said Syrian refugees are well placed to help the Afghan refugees who started arriving in Canada in the last few months.

Her organization, which is based in Mississauga, Ont., launched a campaign this week to raise money for Afghan newcomers and connect them with 100 Syrian refugees.

“Now that Afghan refugees have arrived, it was kind of a way to refresh our memories and remember what we went through five years ago,” she said.

“Many Syrian newcomers were actually asking and telling us: 'How can we support Afghan refugees? What can we do? How can we meet them?”'

Her organization has partnered with four other groups that are supporting Afghan refugees to provide opportunities for now-settled Syrian refugees to help the newcomers in the Greater Toronto Area, she said.

Khobie said the campaign, called From Syria to Afghanistan, will also have a positive impact on Syrian refugees.

Sharing their success stories, remembering what they went through - this is a way to empower Syrian newcomers and Afghan refugees at the same time,“ she said.

“For Afghan refugees, we want them to feel welcomed here in Canada, a sense of belonging, knowing that they're not alone in the community, and everybody is willing to support in every way possible.”