T.O. woman to face trial in August after giving water to pigs in Burlington 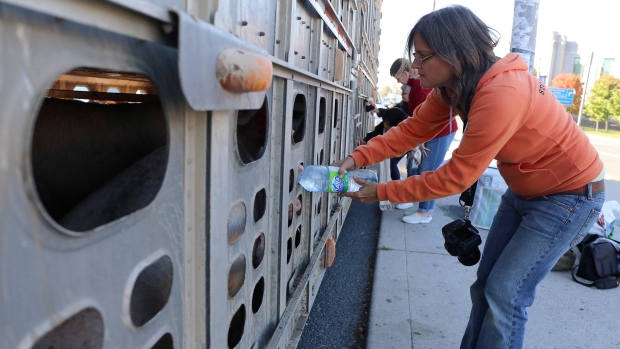 Animal rights activist Anita Krajnc gives water to a pig in a truck in a handout photo. (The Canadian Press/HO-Elli Garlin)

A Toronto woman who was charged with criminal mischief after giving pigs in a tractor-trailer water back in June will face a trial in August, her lawyers say.

Anita Krajnc, co-founder of Toronto Pig Save, appeared in a Burlington courtroom Monday morning, in relation to a June 22 incident. A five day trial was scheduled for August 2016, her lawyers attorneys Gary Grill and James Silver said in a news release.

In an a clip of the incident captured on video, the driver of a truck carrying pigs confronts Krajnc on a roadway near Fearman's Pork Inc., after she gives water to pigs in the trailer through slats and holes in the carriage’s walls.

“Don’t put it in there again,” the driver of truck says to Krajnc in the video.

“If this pig is thirsty, they’ll have water,” Krajnc replies.

The owner of a pig farm filed a complaint against Kranjc the next day. Police formally served Krajnc back in September. She has previously called the charge “outrageous” and said she would continue to give pigs water.

The charge usually carries a maximum penalty of two years in prison or a $5,000 fine.