A task-force is proposing significant changes to the structure of the Toronto Community Housing Corporation including transitioning the organization into a non-profit entity that would no longer be operated by the city.

The final report by the six-person task force makes a total of 29 recommendations on ways to achieve “transformative change” within the TCHC.

Included among the recommendations is a plan to make the agency an autonomous non-profit corporation, allowing it to increase its borrowing capacity by virtue of no longer having to adhere to a rule prohibiting the City of Toronto or any of its agencies from running a deficit.

The report also proposes a number of other changes that packaged together constitute a dramatic overhaul of the way the TCHC operates.

Some of the highlights include creating mixed-income communities where 30 per cent of units have market value rents while the other 70 per cent are subsidized (currently the TCHC follows a 90/10 model), moving to a more decentralized management model where decisions are increasingly made at a building by building level with input from tenants and pushing for government funding to revitalize the existing portfolio and build new public housing units.

The TCHC is currently the landlord for about 110,000 families that are spread across 2,200 different properties.

“We believe these significant changes can put this housing portfolio back on its feet socially and economically,” Senator Art Eggleton, who led the task force, told reporters at city hall Tuesday morning. “This marks the end of our task force mandate but it is hopefully the beginning of a new way forward in meeting the needs of social and affordable housing and its residents here in Toronto.”

The report details two avenues through which the city could transition the TCHC into a non-profit entity.

The first option would see the city immediately create a new independent non-profit housing corporation dubbed “NewHome” that would manage the TCHC’s properties.

Those properties would then be gradually transferred to NewHome or other non-profit housing corporations as they reach a state of good repair, according to the report.

The second option, dubbed “Reform First. Then Transfer,” would temporarily retain the TCHC as the manager of the properties while dividing the organization into three distinct divisions – operations, development and corporate services.

The revamped organization could then be transitioned into a non-profit corporation sometime down the road.

In both scenarios, the report notes that the non-profit corporation would be regulated by the city under Ontario’s Housing Services Act.

“It is clear that there are more effective ways to deliver community housing in Toronto,” Mayor John Tory said Tuesday. “Ask yourself this important question. Why is it that we have about 240 non-profit housing providers in Toronto that are regulated effectively by the city but rarely if ever are the subject of the kind of controversy that we hear about with respect to the TCHC? It is not because they employ people that are any more compassionate or any more dedicated. I would argue it is because the TCHC is in charge of too many buildings, spread over too large an area which house too many people in need of various kinds of serious social support.”

Last January, Tory appointed the six-person independent task force to look in to three specific areas of TCHC operations including partnership and innovation, capital revitalization and new development and governance.

The task force’s interim report, which came out in July, suggested that an additional $171 million could be freed up this year for capital repairs and $200 million could be found next year by re-financing a number of mortgages on TCHC buildings. The interim report also found that safety and the overall standard of living could be improved if the province would grant the city greater powers to evict residents believed to be active in the drug trade or other criminal enterprises.

Speaking with reporters about the task force’s final report on Tuesday, Tory said it is clear to him that there is a “pretty fundamental problem” with the organizational model of the TCHC.

“The issues faced by the TCHC are large, difficult and they have been allowed to accumulate over a very long time,” he said. “We need a leaner, more efficient social housing program that can more directly manage these buildings and be responsive to the needs of tenants.”

Other levels of government must step up: Tory

In accepting the task force report on Tuesday, Tory vowed to ask City Manager Peter Wallace for as “rapid of an assessment as possible” on how the city can implement many of the recommendations contained in it.

Tory, however, cautioned that a number of stakeholders, including both the federal and provincial governments, will have to step up in order for the report to be fully implemented.

“The success of this vision does depend on the participation of all levels of government and significant new funding commitments from both our federal and provincial partners,” he said. “Property taxpayers cannot bear the burden of repairing and moving forward and increasing the supply of housing in a city the size of Toronto.”

The task force heard from more than 1,000 TCHC tenants and community members and met with more than 100 stakeholder groups before drafting its final report.

Though it will ultimately be up to city council to decide whether or not to act on the recommendations, Ward 18 Coun. Ana Bailão told CP24 on Tuesday that she believes the final report adheres to “principals that can be agreed upon,” specifically with regards to a leaner operating model for the TCHC.

“We have a responsibility to now come together and quickly say ‘OK these are the ones that we will move forward with, these are the ones we are going to implement’ because the organization does need change. Everyone can agree with that,” she said. “We need to do a much better job at delivering housing in the city.”

The report will go to executive commitee next week, where Tory will table a motion requesting that city staff report back in the spring on how to move forward with its recommendations.

Bailão, who is also one of three city councillors to sit on the TCHC board, told CP24 that she is hoping there will be "a quick but practical implementation plan."

“We have 240 other non-profit housing providers. Can we strengthen them? Can we work in closer partnership with them? Can we have them have a bigger role in the delivery of housing in our city? That is the very exciting part for me,” she said.

The TCHC currently has a $2.6 billion capital repair backlog.

In addition, Eggleton said that the TCHC has an operating deficit that could surpass $200 million by 2026.

Some of the other recommendations contained in the report include: 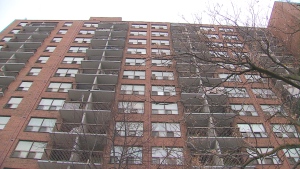 Read the task force report on reforming the TCHC