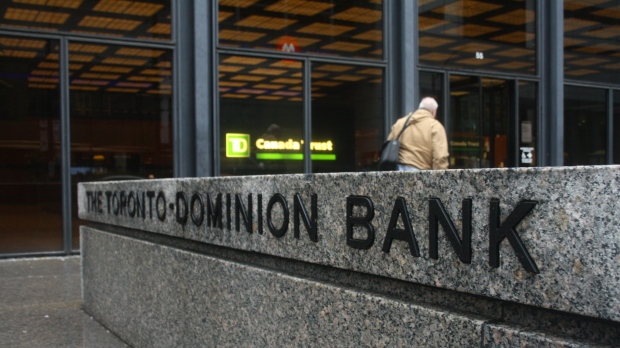 A TD Bank branch is shown in this undated file photo. (CP24/Chris Fox)

The Toronto-based bank said Tuesday it's lowering its five-year variable closed rate to 2.45 per cent, or 1.15 per cent lower than its TD Mortgage Prime rate, until May 31.

TD's special rate follows last week's move by the Bank of Montreal, which discounted its variable mortgage rate to 2.45 per cent until the end of May.

"We are confident this is a strong offer for new and renewing customers, while ensuring we remain competitive in a changing environment," Bellissimo said in an emailed statement.

The moves come amid slowing mortgage growth. The Canadian Real Estate Association said Tuesday that national home sales volume sank to the lowest level in more than five years in April, falling by 13.9 per cent from the same month last year. The national average sale price decreased by 11.3 per cent year-over-year.

Home sales have slowed due to various factors, including measures introduced the Ontario and B.C. governments to cool the housing market, such as taxes on non-resident buyers.

Other headwinds for mortgage growth include higher interest rates and a new financial stress test that makes it more difficult for would-be homebuyers to qualify with federally regulated lenders, such as the banks.

As of Jan. 1, buyers who don't need mortgage insurance must prove they can make payments at a qualifying rate of the greater of two percentage points higher than the contractual mortgage rate or the central bank's five-year benchmark rate. An existing stress test also stipulates that homebuyers with less than a 20 per cent down payment seeking an insured mortgage must qualify at the central bank's benchmark five-year mortgage rate.

The tighter lending rules are making it harder for homebuyers to qualify for uninsured mortgages, and shrinking the pool of qualified buyers for higher-priced homes, CREA's chief economist Gregory Klump said in April.

In turn, the central bank's five year benchmark qualifying rate -- which is calculated using the posted rates at the Big Six banks -- increased last week to 5.34 per cent. This qualifying rate is used in stress tests for both insured and uninsured mortgages, and an increase means that the bar is now even higher for borrowers to qualify.