The chair of the Toronto District School Board is asking political parties to “put younger people first” and reimburse Toronto schools for pandemic-related costs ahead of the upcoming provincial election.

Alexander Brown held a news conference Wednesday, two weeks ahead of the June 2 election, and said “education has been missing” in all of the parties’ platforms.

“I strongly believe that education should play a larger role in this election. This provincial government needs to prioritize the young people of Ontario who we can all agree have suffered greatly over these past two years,” he said from the TDSB’s head office on Wednesday afternoon.

The TDSB is projecting a deficit of $52.2 million for the 2022-23 school year, primarily due to pandemic-related costs and declining enrollment. The deficit also includes the TDSB’s annual structural deficit.

At the news conference, Brown urged all parties to commit to providing the TDSB with additional funding to cover the shortfall. He also wants additional funding for the board’s three-phase pandemic recovery plan that will identify groups that have been most impacted by the pandemic, where interventions will be put in place, and initial outcomes that result from those interventions.

“I'm specifically asking for a commitment to reimburse all pandemic-related expenses incurred by the school boards over the past two years, to fully fund the TDSB’s pandemic recovery plan and to reinstate the enrollment stabilization funding, provide additional funding to cover cost increases related to employee benefits, utilities and other inflationary cost increases that are not currently funded by the ministry,” Brown said. 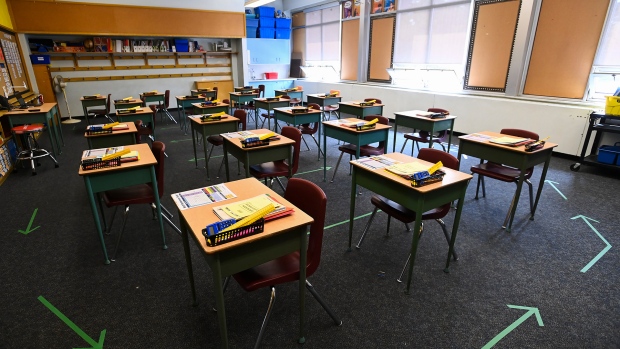 If additional funding is not given to the TDSB then Brown said it will have to look for savings, and cuts will have to be made to staffing and programming.

“We would have to find the $52 million in our budget as with the money that the province gives us, which means that we'd have to look at the programming, we may have to shift where we put resources to move it into the pot to pay for, to cover the $52 million. We may see decreases in staff. We're always worried that programming may be affected by this,” he said.

Earlier this week, the TDSB updated its three-year projection and recovery plan to cover the deficit by paying an estimated $12 million in the first year and $12 million in each of the following years.

Over the past two years, Brown said he has sent numerous letters to Education Minister Stephen Lecce that outline deficit concerns and request additional funding.

Brown also noted that the current Ford government doesn’t have “a good record so far” with funding for the TDSB as the government slashed almost $70 million of the board’s funding in the first year Ford came into office in 2018.

Chair of the Toronto District School Board, Alexander Brown, is asking provincial parties to prioritize students and reimburse pandemic-related costs ahead of the June 2 election.