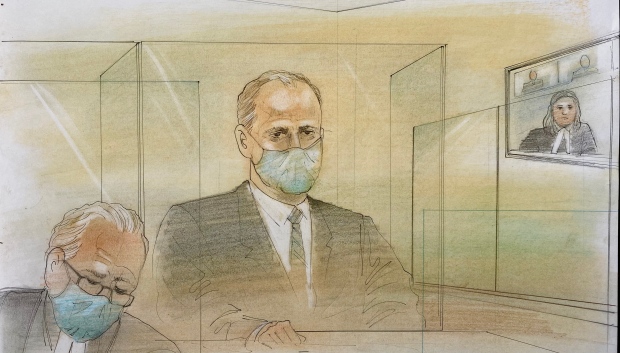 TORONTO - A Toronto teacher who led a high school canoe trip during which a student drowned testified Tuesday that he last remembers seeing the teen standing in the shallow water of the lake, and didn't see him leave the area.

Nicholas Mills says he never saw Jeremiah Perry swim past him, or go out of the water, while their group was out in Trout Lake in Algonquin Provincial Park on July 4, 2017.

Mills, a teacher at C.W. Jefferys Collegiate Institute, said he still doesn't understand how Perry arrived at the place where his body was found.

“It's been four years of asking myself that, and I don't know,” he said.

Mills said he was also in the lake at the time but was focusing more of his attention on the students who were swimming furthest from shore. It was only after another student called out to him on a different matter that Mills realized Perry was unaccounted for, he said.

The teacher said he immediately ordered everyone out of the water and sent some students to search the surrounding area while the lifeguard and others started diving in to look for the missing teen.

“I was hoping that he would be on land,” Mills said.

The teacher has pleaded not guilty to criminal negligence causing death in the 15-year-old's drowning.

Prosecutors allege Mills neglected safety rules in planning and carrying out the multi-day excursion, which was part of an program for underserved youth.

Crown attorney Anna Stanford argued Tuesday that Mills thought he “knew better” than the rules and was set on carrying out the annual trip no matter what, placing his belief in the inherent value of the experience over the safety of students.

Mills denied the allegation and maintained he could lead a safe outing even without following all the rules imposed on him.

“Yes, I wanted to run the program, but my priority was always to have a safe canoe trip,” he said.

He testified Monday that he ignored or modified certain rules laid out by the Ontario Physical and Health Education Association -- which he was required by the school board to follow -- because they were impractical or didn't align with industry standards.

Under cross-examination Tuesday, he maintained that “most gym teachers” see the rules as guidelines rather than “hard and fast rules,” but acknowledged most teachers aren't taking dozens of students on overnight wilderness trips.

“I believe I tried to follow OPHEA where I could and I felt reasonable,” he told the court. “I still believe it was a safe trip.”

Court has heard that 15 out of the 33 students on the canoe trip -- including Perry -- had failed a mandatory swimming test, and that many underwent the assessment while wearing a life jacket. The OPHEA rules require students to pass the test without a life jacket in order to participate in an overnight canoe trip.

Mills said he believed Perry had passed when he “scanned” the results of the swimming test, which was held a few weeks before the trip.

Prosecutors suggested, however, that wasn't possible since everyone whose name was near Perry's was also marked as having failed. They further noted Mills never consulted the test results after that, nor did he share them with other trip supervisors or the lifeguards.

“So you lied to the superintendent,” she said.

“Yes, I think a lot of people would look at it that way,” Mills said.

He agreed with the Crown that none of those things were planned because he knew it was “highly unlikely” any of the students would be barred from going on the trip even if they failed the swim test.

Earlier Tuesday, Mills gave his account of Perry's disappearance while under examination by his own lawyer.

The defence suggested Perry left the water, walked up a hill and around to another area, where he went into the water.

The teacher said he would not have been able to see Perry go in the water if he did so at that location, nor would he have been monitoring that area. “It was well outside the swim area that we had defined,” he said.

This report by The Canadian Press was first published June 29, 2021.

Fifteen-year-old Jeremiah Perry, a student at C.W. Jeffreys Collegiate Institute, is seen here in a photo provided by his family.