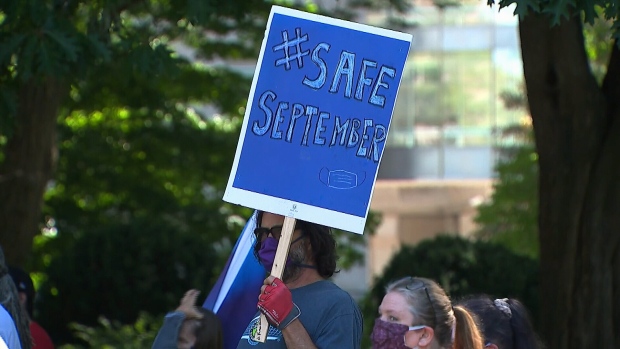 TORONTO - An escalating disagreement over school reopening safety standards between Ontario's major teachers' unions and Premier Doug Ford's government could be headed to the province's labour board, a letter to union members said late Tuesday.

In a joint update to the 190,000 teachers and education workers they represent, the unions said a Monday sit down with Minister Monte McNaughton produced “no firm commitment” to address allegations that the province's school reopening plan violates the Occupational Health and Safety Act.

“(The unions) stressed repeatedly in the meeting that these standards are not just necessary for the safety of teachers and education workers, but also protect the safety of students and their families,” the letter said.

With just weeks to go before classes start, the Ford government has faced increasing pressure over its COVID-19 pandemic back-to-school plan.

The province's strategy will see students in kindergarten through Grade 8 return to school without any reduction in class sizes, though students will spend the day in a single cohort to limit contact with other children.

Most high schoolers will also be in class full-time, though students at some boards across the province will take half their courses online in a bid to curb the spread of the novel coronavirus.

Teachers' unions, school boards, and some parents say the province must lower elementary class sizes and fund the reduction, instead of insisting boards dip into their own reserve funds to lease extra space or hire additional staff to promote physical distancing.

The unions said Tuesday the Labour Ministry - which oversees workplaces in the province - should order standards which mandate 15 to 20 students per class, to ensure a two-metre distance can be maintained between pupils.

They said an order establishing a maximum cohort of 50 students should be set and along with busing standards which take precautions against COVID-19.

“The unions raised the urgent concern that there are no clear health and safety standards being set out or ordered by the Ministry ... the Ministry confirmed that no such standards have yet been set,” the union alleges in the letter.

“The Ministry was asked why, if those standards were good enough for judges and lawyers, they were not good enough for students, teachers and education workers,” the letter said.

They said boards should also be allowed to delay the beginning of the academic year either board wide or at specific schools to ensure health and safety measures are in place.

The government has said it will allow school boards to stagger the start of school over the first two weeks of the new academic year and has pledged an additional $50 million for upgrades to ventilation systems.

If the orders aren't issued by Friday, the unions say they will file a complaint about the province's reopening plan to the Ontario Labour Board.

A spokesman for the labour minister said inspectors are currently working with safety staff and Joint Health and Safety Committee co-chairs at school boards across Ontario.

“We have been vigilant in enforcing workplace safety for frontline workers in the health care, construction, agriculture, manufacturing, service and retail sectors,” Bradley Metlin said in a statement. “We will continue this vigilance with teachers as well.”

The Ontario government has had a rocky relationship with the province's teachers' unions since taking office in 2018.

Earlier this year, the government concluded a contentious round of contract talks with the unions after months of teacher walk outs that led to days-long school closures.

Ford has repeatedly criticized the unions in recent weeks, appealing to them to work with the province on the return to school.

Last week, he defended his plan saying it's been approved by experts including the province's chief medical officer of health.