Toronto police are searching for three males following a stabbing that left a 17-year-old male dead behind a highrise apartment building in Etobicoke Wednesday evening.

Officers were called to the building on The West Mall, just south of Rathburn Road, shortly after 7 p.m.

According to police, the victim was found at the rear of the building suffering from multiple stab wounds.

“I was at the window there and I (saw) cops passing by with the lights on,” area resident Joseph Moniz told CP24 at the scene.

He said he then saw paramedics performing CPR on the victim at the back of the building.

The victim was pronounced dead at the scene. He has been identified by police as Saed Keyliye.

“It appears on the video that two males are in pursuit of the other two males,” he said.

Descriptions of the three males sought in connection with the fatal stabbing were not provided. No weapon has been recovered.

“To the suspect who didn’t do the stabbing – I think it’s real important for him, at this particular time, to get himself a lawyer and give me a call,” Ryan said.

Police continue to investigate at the scene. 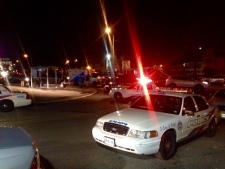 Police cruisers are seen outside a highrise apartment building on The West Mall following a violent assault that left one male dead on Wednesday, Feb. 3, 2016. (CP24/Cristina Tenaglia)