Teen dies after being run over by parade vehicle

A teenaged boy has died after being run over by a parade vehicle on Lake Shore Boulevard West near Jameson Avenue Saturday night, Toronto police say.

Police said the male was run over after he fell under a parade float he was riding on as part of the Scotiabank Toronto Caribbean Carnival grand parade. It happened shortly before 9 p.m.

Paramedics rushed the man to hospital with life-threatening injuries, but he later died.

EMS initially said the male was 23 years old, but police later confirmed he was 18 years old.

Police are asking anyone with information about the incident to call Toronto Police Traffic Services at 416-808-1900. 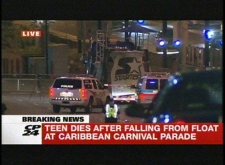 Police vehicles attend the scene where a teen was run over and killed by a parade float on Lake Shore Boulevard West Saturday August 3, 2013.