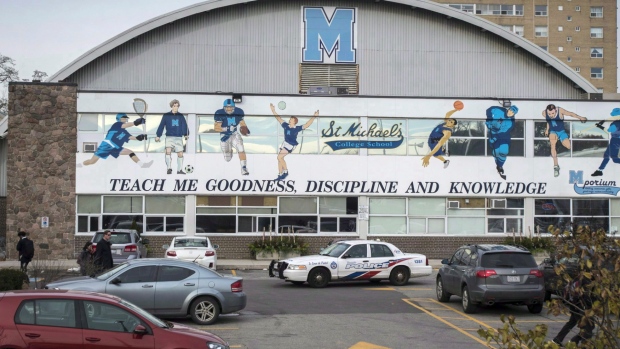 Toronto police respond to a bomb threat at St. Michael's College School, in Toronto on November 19, 2018. THE CANADIAN PRESS/Tijana Martin

TORONTO - A teenage boy recalled hearing a group of students laugh as they held back his arms and sexually assaulted him with a broom handle in the locker room of a prestigious Toronto high school, court heard Tuesday.

A video of the teen's statement to police, in which he describes the October 2018 incident, was played in a hearing that took place both in a courtroom and over videoconference.

The role of a teen boy charged in the incident was not specified in the portion of the video played in court Tuesday, and the complainant did not mention the accused by name in that part of the clip.

In the video, the boy said the locker room at St. Michael's College School had largely cleared out following an afternoon football practice when he heard a “commotion” and saw a group of students approaching. He heard a cheer, and one of the other boys grabbed a broom, he said.

The teen said he tried to run out of the room despite having only his dress pants on, but one of the others tripped him from behind, and the group dragged him “as a collective” towards a bench.

The boy described being on his knees, with two people holding his arms behind his back, as someone pulled down his pants and underwear. At one point, someone slapped his buttocks loudly, and one of the other boys took out a phone to capture the incident on video, he said.

It was then that someone behind him shoved the broom handle into his anus, the boy said in the video.

Court has previously heard the accused helped other teens immobilize another student who was sexually assaulted with a broom handle in November of that year.

In his statement, the complainant said the incident unfurled quickly and ended abruptly when the group dispersed.

The teen said he got changed quickly and made the boy who had filmed the incident delete the video from his camera roll, fearing it would be shared with others. However, he didn't check whether the footage was erased from the phone's deleted items folder, he said.

The boy then walked out of the school to meet his father, who was picking him up, he said. He said he did not mention the incident even when asked about his day.

“I feared for my own safety a little bit,” he told the investigator in the video. The boys behind the incident were popular with students and teachers alike, and the teen believed he would be blamed if they were expelled as a result of the incident.

Once he got home, the boy said he took a shower.

“I was horrified that this happened to me,” he said.

The next day, a student who was not involved in the incident asked him about it, sparking fear that the video had been shared after all, he said.

Weeks earlier, video of another incident in which fellow students repeatedly struck his buttocks with a broom in the locker room had been widely circulated, causing a lot of shame and embarrassment, he said.

More of the boy's statement to police is expected to be played when the trial resumes Thursday.

Det. Const. Daniel Sunghing, who is with the Toronto police sex crimes unit, first began his testimony in March before the trial was put on hold due to the COVID-19 pandemic.

Court has previously heard there were two sexual assaults at the school in 2018 when boys involved with a school football team pinned down two different victims and sexually assaulted them with a broom handle in a locker room.

One of them also pleaded guilty to making child pornography for recording one of the sex assaults in a video that was then shared widely within and outside the school.

Another student received a two-year probationary sentence with no jail time after pleading guilty. The charges against two other students were dropped.

Neither the accused teen, the perpetrators or the victims can be identified under provisions of the Youth Criminal Justice Act.