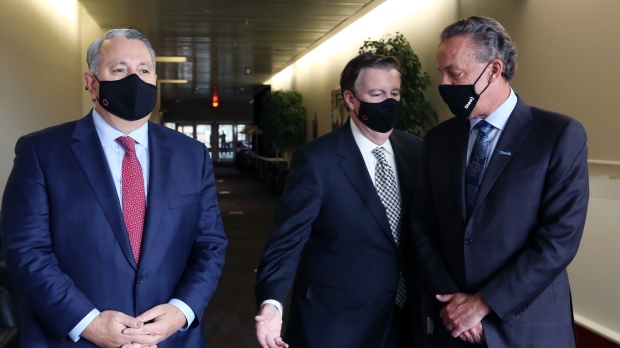 Brad Shaw, right, Chairman and CEO of Shaw Communications chats with Edward Rogers, Chairman of Rogers Communications, centre, as Rogers CEO Tony Staffieri looks on during a break at ther CRTC hearing looking into the merge of the two communication companies in Gatineau, Quebec, on Monday November 22, 2021. THE CANADIAN PRESS/Fred Chartrand

During Monday's opening day of hearings in Gatineau, Que. on the merger, Rogers executives said the company needs to acquire Shaw in order to grow to the size to get the kind of scale needed to compete against increasing competition from companies like Netflix and Amazon.

Telus said that achieving that scale would open the potential for Rogers to secure exclusive rights to international content, and make Rogers a de facto licensing authority for Canadian programming.

“This merger will greatly reduce competition and consumer choice, and will impoverish the diversity of voices in the broadcasting system” said Stephen Schmidt, vice-president telecom policy and chief regulatory legal counsel at Telus.

“The unprecedented scale will also turn Rogers into a gatekeeper for Canadian programming services, because these services will depend on Rogers for their continued survival.”

Vancouver-based Telus said that if the merger went ahead, Rogers would have about 47 per cent of English-language broadcast subscribers and that its network would reach 80 per cent of Canadians.

The scale, combined with Rogers' vertical integration of program creation and distribution, would give it tremendous potential to control exclusive content, he argued.

Schmidt said that regulatory safeguards would not be enough to offset the competitive advantage of that scale, and urged the regulator to reject the deal.

He also challenged Rogers' argument that the deal was needed to boost infrastructure investments, noting that the $1 billion for rural infrastructure and $2.5 billion for 5G networks that Rogers has committed to pales compared with the $27.5 billion Telus has committed on fibre and 5G in B.C. and Alberta without any merger and that the spending would likely go ahead in any case.

“The benefits are emphatically not significant,” he said.

Rogers said Monday that the deal would increase competition, especially by moving into rural areas that are currently only served by Telus.

Rogers wouldn't guarantee that Shaw customers wouldn't see rate increases, but said competition from Telus would act as a check on prices.

Schmidt said Telus wouldn't be able to compete, however, if it didn't have access to the content that Rogers would be able to offer.

The hearings at the CRTC are focused on the broadcasting aspects of the merger, while other issues such as mobile wireless services will be reviewed by the Competition Bureau and from Innovation, Science and Economic Development Canada.

Several other intervenors including BCE Inc. and consumer advocacy groups are also set to speak at the hearings that continue through the week, with Rogers set to respond to comments on Friday.