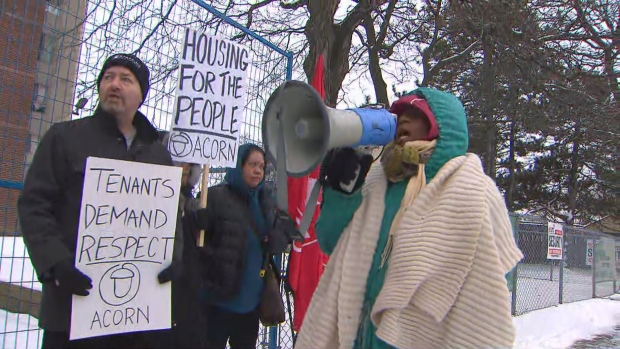 Displaced tenants and ACORN Toronto members are shown holding a protest outside 235 Gosford Boulevard on Dec. 7.

Roughly a dozen tenants displaced by a massive fire-alarm fire at a North York high-rise last month held a protest outside the shuttered building on Saturday as they demanded greater support from their landlord.

Approximately 700 tenants were forced out of their homes when a fire ripped through an apartment building at 235 Gosford Boulevard on Nov. 15, killing one person and injuring six others.

Some of the tenants were initially housed in an emergency shelter set up by the city at York University but that facility closed after two weeks and arrangements were made to transfer those without alternative accommodations to a nearby hotel.

In the weeks that have followed the fire, some tenants have expressed concerns about the level of communication from the landlord and what they claim has been an underwhelming effort on its part to find them appropriate accommodations while the building is being repaired.

“I get that they don’t necessarily know exactly when we can go back in but they have just been so callous,” resident Maiga Duncan told CP24 during Saturday’s protest. “They called our neighbour who died a lost client. That is how they see us. Just people that give them money and not human beings who have lives who have been completely destroyed by this.”

The Nov. 15 fire began on the eighth floor of the building and ultimately spread to five other floors before being extinguished.

Speaking with CP24, Duncan said that she is one of the lucky ones because her employer helped provide her with a place to stay until January but she said that it should ultimately be the responsibility of management to provide residents with alternative accommodations.

“We are human beings, this is our home and they do need to step up,” she said. 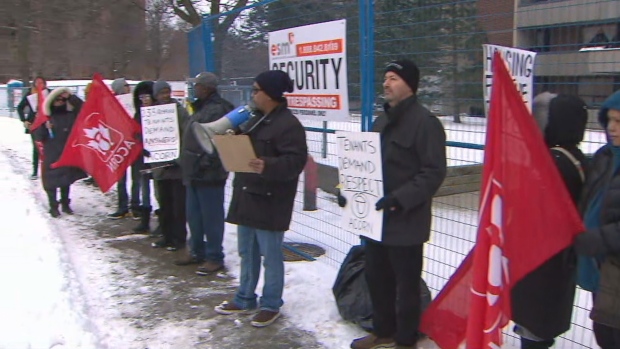 Residents given no timeline for return

The residents displaced by the fire at 235 Gosford Boulevard have been given no timeline for when they may be able to return home, though Mayor John Tory has previously said that he has been told that it could be months.

One resident, who has been staying in a hotel with his wife and son following the Nov. 15 blaze, said that he still has nightmares about the blaze.

He said that the uncertainty has made the last few weeks even harder than they may have otherwise been.

Another resident, meanwhile, said that she can’t understand why the landlord hasn’t held a formal meeting with tenants.

“Why hasn’t management been able to meet with us residents and in a wider forum be able to give information other than just on a Facebook page?” Larissa Bablak asked. “It’s been very frustrating. We are going into the third week right now and I think a lot of people were hoping that we would have information on how to move forward.”

The protest was organized by Toronto ACORN (Association of Community Organizations for Reform Now), which is a group that represents low and moderate income households.

CP24 has reached out to the building’s landlord, Ronkay Management Inc., for comment about the complaints of some residents but has not yet heard back.