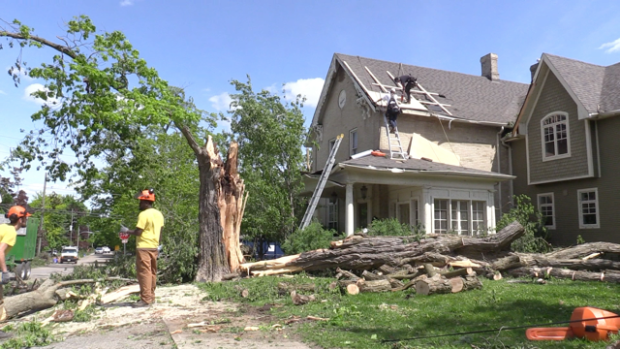 Damage in downtown Uxbridge, Ont., after a powerful storm hit the area on Sat., May 22, 2022 (MIKE ARSALIDES/CTV NEWS)

Environment Canada said a derecho – a rare widespread windstorm associated with a line of thunderstorms – developed near Sarnia, Ont., on Saturday and moved northeastward across the province.

Hydro One says almost 72,760 customers are still in the dark, with those in the Bancroft, Perth and Tweed regions expected to be without power for several days.

Hydro Ottawa says some 53,000 customers are still without power but most are expected to have service restored by Friday.

Thousands of trees were toppled, power lines were downed and extensive property damage was reported in some areas.